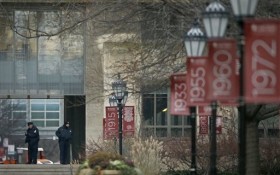 The University of Chicago may have felt it had no choice but to take the extreme step of closing for an entire day after an online threat against whites on campus, security experts said.

“I think the university erred on the side of caution after putting the whole picture together,” said Michael Fagel, who teaches national security and emergency management at several schools, including the Illinois Institute of Technology. “They had to think: If we don’t react appropriately and something happens, there’ll be an outcry.”

Jabari R. Dean, 21, of Chicago, was arrested Monday on a federal charge of transmitting a threat in interstate commerce. According to a criminal complaint, Dean, who is black, posted the threat online Saturday, days after prosecutors charged Van Dyke with first-degree murder and after the city released video of the shooting.

Dean, an electrical engineering student at the University of Illinois at Chicago, wrote that he would “execute approximately … 16 white male students and or staff, which is the same number of time (sic) McDonald was killed” and “will die killing any number of white policemen that I can in the process,” the complaint says.

The University of Chicago cited “recent tragic events” at other campuses nationwide in explaining its decision to close. On Oct. 1 at Umpqua Community College in Roseburg, Oregon, a gunman opened fire and killed nine people. Other shootings have happened in Arizona and Tennessee.

The FBI was tipped about the Chicago threat Sunday, according to a criminal complaint. After the FBI traced it to Dean, he admitted to agents that he had posted it online and said he took it down shortly afterward, the complaint says.

Graduate student Marlene Saint Martin, of Mexico, said she heard about the threat through a flurry of phone messages Sunday night, then saw an email from campus officials announcing classes were canceled.

“I felt that at least the university was taking all the precautions to keep us … safe,” she said.

The university’s move affected more than 30,000 people, though the University of Chicago Medical Center was open to patients.

The online threat allegedly read: “This is not a joke. I am to do my part and rid the world of white devils.”

Phillip Rutherford, Dean’s uncle, told reporters that his nephew had “run out of things to do,” and was simply bored.

It’s common for high schools to close in response to threats, but rarer for universities because of the logistical complexities of shutting such large institutions, said Georgia-based campus security expert Michael Dorn. He didn’t know the specifics of the University of Chicago case but said being too quick to shut down a university can play into the hands of those making threats.

“Overreaction is a real danger,” he said. “That is the goal of terrorism and other violent events. … There’s the goal to obtain notoriety and gain attention.”