What do you do with a drunken sailor? How about this - The Horn News 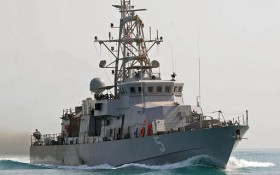 A U.S. Navy officer relieved of commanding a Persian Gulf patrol ship allegedly failed to maintain equipment to the point of exposing “his crew to unnecessary risk,” interfered with an inquiry into his actions and once slept drunk on a bench at a Dubai port, according to a naval investigation.

The accusations against Lt. Cmdr. Jeremiah Daley saw the Navy on March 12 remove him from the USS Typhoon, a Manama, Bahrain-based vessel patrolling a region crucial to global oil supplies where American forces routinely have tense encounters with Iranian forces.

Daley, now assigned to Task Force 55, is on leave and was unavailable for comment Thursday, according to the U.S. Navy’s 5th Fleet, which is based in Bahrain and oversees the task force. Later reached by The Associated Press, Daley said he was challenging the report and appealing his punishment as a “good number of things are 100 percent not true.”

He declined to elaborate as he said he was on leave for the birth of his second child, adding that he wanted the appeal process “to take its course.”

The 300-page investigative report into Daley’s actions, obtained by the AP through a Freedom of Information Act request, shows his crew also complained about his poor management style, with one sailor saying morale aboard the ship was the “worst” the sailor had seen in a 28-year career.

Daley assumed command of the Typhoon, a coastal patrol ship that typically carries 24 enlisted personnel and four officers, in May 2015. The Typhoon is one of 10 Cyclone-class ships the Navy bases out of Manama to patrol shallow waters in the Persian Gulf, providing security amid the U.S. campaign against the Islamic State group and other extremists while offering a counterbalance to Iranian vessels in the region.

The investigation into Daley began in February after a survey found a majority of those on board the Typhoon didn’t trust the vessel’s leadership. The Navy conducted focus groups with those onboard and though officials redacted much of their responses, witness statements included in the report show there were concerns about Daley not following the chain of command.

The report goes on to include allegations of favoritism by Daley, as well as several instances of the lieutenant commander drinking in front of his crew, including once at Dubai’s Jebel Ali port. While hotels freely serve alcohol to tourists in the city-state, public intoxication is a criminal offense.

Citing one sailor, whose name like those of others in the report was redacted, it said “Daley was intoxicated in Jebel Ali and acted in a disorderly manner while walking back to the ship.” It added that he “allegedly slept outside on a bench.”

“Daley’s behavior while on liberty in Jebel Ali demonstrated questionable judgment, including imprudent use of alcohol and surprisingly close association with enlisted crew members,” the report read.

Daley also hosted a Fourth of July party at his villa in Bahrain to which he invited all his crew and he drank in front of those there, according to the report.

Meanwhile, needed repairs for the Typhoon’s engines and fire-suppression system, as well as its rigid-hull inflatable boat onboard, were not properly reported or handled, the report said. That “subjected his crew to unnecessary risk of harm,” according to the report.

In late February, Daley also made “suspected false statements” to superiors about equipment left on a pier and later was suspected of trying to question crew members about what they told investigators, the report said.

Citing his “poor performance as a commanding officer and his multiple lapses of personal integrity,” the report said the commanders removed Daley from the Typhoon.

Iran views the Persian Gulf and the Strait of Hormuz, through which nearly a third of all oil traded by sea pass through, as being under its sphere of influence. U.S. and Iranian forces even fought a one-day sea battle in the strait in 1988. A few months later, a U.S. ship mistook an Iran Air flight heading to Dubai for an attacking fighter jet, shooting down the plane and killing all 290 onboard.

While a small vessel compared to other U.S. warships in the Gulf, the Typhoon has found itself embroiled in the cat-and-mouse naval encounters between America and Iran. In April 2008, amid a period of high tension, the Typhoon fired a flare at a small Iranian boat in the Gulf after it came within about 180 meters (200 yards) of the American vessel.

Despite the recent nuclear deal, encounters between the two navies continue.