Did Hunter Biden pass around his father's classified docs? - The Horn News 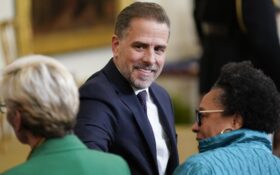 The nation was shocked to learn that, for years, President Joe Biden kept classified documents next to his Corvette—but they should have been concerned that he kept them near Hunter Biden… at a time when Hunter was pretty close to some Chinese Communist Party affiliates.

Hunter’s “laptop from Hell” has served up salacious details about the First Child’s sex life, his drug habits, his spending clutch and so much more.

But if you put the really important details together, you get the most dangerous story of all.

Hunter Biden was likely living in the same house where his father kept highly classified government documents. At the same time, Hunter was  receiving millions in dirty business dealings, was meeting with arms of the Chinese Communist Party, and was even going to court to defend a spy for the People’s Republic.

And he was handing money to his father, Joe Biden.

Most of the media have refused to connect these dots, but The Horn thinks you deserve to know.

President Biden has admitted that he took classified documents with him after he left office and put them in his garage… where he keeps his 1967 Corvette Stingray.

“My Corvette is in a locked garage, OK? So, it’s not like they’re sitting out on the street,” Biden said at a press conference.

The address of that home is publicly known.

Hunter Biden likely lived in that house off-and-on after his 2017 divorce.

After Hunter’s divorce, he filled out a rental background check form in July 2018 and listed his current address. He listed the same address on a temporary driver’s license and various credit and Apple bills.

It was the same address as the house with the Corvette in the garage.

There’s even a picture of Hunter driving the famous Corvette with two young ladies by his side, so he had access to the documents.

Much of that has been reported, at least in conservative media. Here’s the part they leave out.

Around the same time, Hunter Biden was making millions from officials with links to the Chinese Communist Party… and even defended a spy in court.

Hunter Biden began meeting with Chinese executives when his father was vice president. He even joined his father to seal a business deal while Biden traveled on an official diplomatic mission.

The Chinese Communist Party likely had a hand in CEFC’s affairs, as it does with many Chinese businesses.

CEFC official Ye Jianming gave Hunter a 3.16-carat diamond at a meeting in Miami in February 2017, during Hunter’s contentious divorce proceedings with his ex-wife, Kathleen.

Things went so well that Hunter was able to bag a cool $1 million to serve as legal counsel to Patrick Ho… and Hunter once called Ho “the f—king spy chief of China.”

Hunter had a law degree—from Yale Law School—but knew as much about defending international figures from espionage charges as he did Ukrainian energy deposits. Ho was convicted.

But Hunter earned $1 million for defending a spy, while living in the house classified documents.

All the evidence suggests that China thought it was buying the Biden family outright. Over the summer of 2017, Hunter Biden sent Ye Jianming an email wishing him “best wishes from the entire Biden family.”

An associate tried to reassure a jittery Tony Bobulinski—who would get screwed in the business deal—not to worry that the president’s brother, James, had become “a focal point” in the CEFC deal. His associate, James Gilliar, tried to reassure Bobulinski that James Biden’s participation in the deal “strengthens our USP to Chinese as it looks like a truly family business.”

Gilliar is the one who broke down the business deal a month later, saying that Hunter Biden holds 10 percent of the profits for “the big guy”—his dad, Joe Biden.

Let’s not forget that a few months after he moved out of that mansion, Hunter Biden complained in an email to his daughter Naomi that he had been forced to “pay for everything for this entire family [for] 30 years,” before he reassured her: “unlike Pop I won’t make you give me half your salary.”

Joe Biden got money from Hunter, while Hunter lived in his Wilmington house, representing a Chinese spy, doing multimillion-dollar business deals with CCP-affiliated businesses, and driving the Corvette that was parked next to a pile of highly classified U.S. government documents.

Did Joe Biden know about his son’s business dealings?

Did he steal classified documents, possibly about China, to help his boy?

Did he financially benefit from the spy deal?

Republicans should be racing to investigate this issue and, if proven, impeach and convict Joe Biden and his entire corrupt family.