You’ve heard of therapy dogs, but this is a new one… - The Horn News 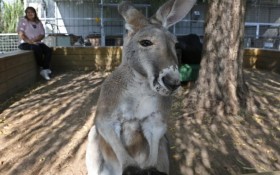 The Utah Red Cross plans to honor a year-old red kangaroo that works as a therapy animal at a Salt Lake City veterans home.

Charlie is one of about a dozen therapy animals at William E. Christoffersen Veterans home. The marsupial has also visited special education classes and hospice care facilities.

Charlie weighs 30 pounds, but is expected to grow quickly, reaching about 5 feet 2 inches and 125 pounds. That means he won’t be able to stay in the veterans home much longer.

Bernie Kindred bonded with the bounder when he moved into the home about a year ago and told KUTV-TV he shares licorice with Charlie.