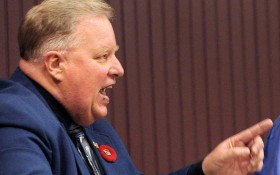 Is Maine getting ready to publicly out all of its welfare recipients?

Robert Macdonald, mayor of Maine’s second largest city, Lewiston, touched off a firestorm recently when he said he wants to create an online registry of Maine residents who receive welfare benefits.

Macdonald wrote in a column in the Twin City Times that if the public can find out information about public pensions, they should be able to do the same for welfare recipients. He says he’ll be submitting a bill asking that a website be created containing the names, addresses, length of time on assistance and the benefits being collected by every individual on the dole.

“Our liberal, progressive legislators and their social-service allies have made them a victimized, protected class,” he said in the op-ed.

Macdonald says he plans to also resubmit a bill that would limit an emergency benefit program to 60 months over a person’s lifetime and another prohibiting the state from paying benefits for any additional child born after the recipient has been accepted into general assistance.

The controversial politician’s plan has sparked debate on news sites and social media, and has been called everything from heartless to a way to encourage residents to be less dependent on public programs.

What do you think of Macdonald’s plan? Sound off in the comments below.