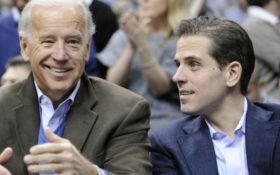 Former Vice President Joe Biden has been slipping in the polls — and his 2020 Democratic presidential hopes became even bleaker Monday after a controversial “hairy legs” video from 2017 went viral on social media.

Biden is shown in the video rambling about his past as a lifeguard in Delaware and his love for children, hair legs, and roaches.

“By the way, you know I sit on the stand and it’d get hot,” the viral footage shows Biden saying. “I got a lot of — I got hairy legs that, that… that turn blonde in the sun.”

“And the kids used to come up and reach in the pool and rub my leg down so it was straight, and then watch the hair come back up again,” Biden continued.

“I love kids jumping on my lap!” Biden says to the confused crowd.

JOE BIDEN: "I got hairy legs that turn blonde in the sun. The kids used to come up and reach in the pool & rub my leg down so it was straight & watch the hair come back up again. So I learned about roaches…”

“I love kids jumping on my lap."

“They savaged Romney over ‘binders of women,’ but Biden is ON VIDEO telling a creeptacular story about little African-American kids rubbing his long, silky, leg-locks, and the media completely ignores it?” Republican insider Herman Caine wrote on social media.

“THIS IS TOO STRANGE FOR WORDS,” Hollywood actor Chuck Woolery wrote.

The viral video’s timing couldn’t be worse for the Biden campaign, which is on a whirlwind tour trying to gain support in Iowa.

The Iowa investment this week reflects the reality that a bad start in the opening contest threatens Biden’s standing in states that follow. He’s spending much of his tour focusing on small-town Iowa, where aides believe he has strong support.

It’s unclear if that’ll be enough to overcome his weakness with the party’s energized liberal base elsewhere, but this is what his advisers think is the best way forward.