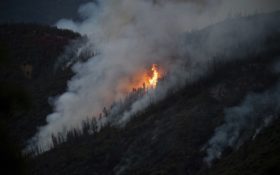 U.S. Forest Service spokesman John DeYoe says the blaze has scorched 14 square miles (36 kilometers) of brush and timber as of Monday morning. It is 2 percent contained.

Temperatures spiking to 95 degrees (35 Celsius) and inaccessible terrain were making it difficult for crews to slow the blaze that started Friday.

The wildfire that comes at the peak of tourist season shut down a key route into the park and prompted mandatory evacuations for Yosemite Cedar Lodge and nearby communities.

Firefighter Braden Varney was killed over the weekend while working on a bulldozer to try to prevent the fire from spreading.

Cal Fire Deputy Chief Scott McLean says Varney’s body is in “precarious terrain” but that they hope to recover his body Monday.