We got him! US kills top terror mastermind - The Horn News 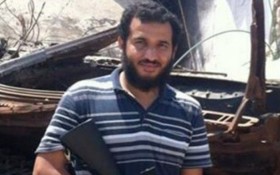 A notorious al-Qaeda leader in Northwest Syria who had big plans to attack the West is dead.

The US military has just confirmed that an airstrike in Syria killed the high-level al-Qaeda commander known as Sanafi al-Nasr.

A statement from the U.S. Defense Department says coalition forces conducted the airstrike on Thursday over northwest Syria.

al-Nasr, the alleged leader of al-Qaeda’s operations in Syria, was one of six men that the U.N. Security Council imposed sanctions on last year.

The Pentagon says al-Nasr was “a longtime jihadist experienced in funneling money and fighters” for the terrorist network.

The U.S. says al-Nasr was a leading figure in the Khorasan group — a secretive cell of al-Qaeda operatives who U.S. officials say were sent from Pakistan to Syria to plot attacks against the West.

U.S. Defense Secretary Ash Carter says the military operation “deals a significant blow” to the Khorasan group’s plans to attack the U.S. and its allies.

A U.S. official who was not authorized to discuss the strike publicly and spoke on condition of anonymity said an American drone targeted and struck the militant.

Abdul Mohsen Abdallah Ibrahim al-Charekh, the Saudi better known as Sanafi al-Nasr, was killed in an airstrike near the northern Syrian town of Dana, along with another Saudi and a Moroccan member of al-Qaeda’s local affiliate, known as the Nusra Front.