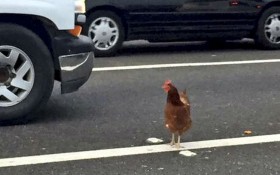 There’s no “fowl” play here.  The chicken that snarled traffic at the Oakland-San Francisco Bay Bridge last week is heading home. The owner of a wayward chicken reclaimed his bird Tuesday and planned to take it to an elementary school garden like he intended to do the day the chicken escaped from a cardboard box in his pickup truck.

Former Oakland mayoral candidate Ken Houston says he was taking two of his chickens to donate them to a nearby school garden last Wednesday when he stopped his pickup truck at the Oakland Army Base, near the toll plaza, to check on a work project.

That’s when he realized the cardboard box carrying his chickens in the back of his truck was empty.

When Houston’s assistant called with the news that the wayward chicken was on the news, he said he was worried he’d get in trouble with transportation officials.

One small brown chicken was eventually captured by the California Highway Patrol, as well as news cameras and people with their cellphones at the ready. The agency later posted a photo of the “felonious fowl” in custody on its Twitter account. The second chicken was never found.

Houston swung by Oakland Animal Services, where the chicken had been taken, and asked an employee if he’d get into trouble for his wayward chicken.

She assured him he was safe.

The shelter named the chicken Chip, a nod to the CHP for the rescue. Coincidentally, she went by Chipper before her escape.

Houston was donating the birds to the garden at Stonehurst Edible Schoolyard, where several chickens had recently died.

With pictures of the chickens and paperwork showing he is the rightful owner, he’ll pick up Chip Tuesday afternoon, shelter director Rebecca Katz confirmed.

“It’s so great because we are finishing the mission. The mission was to give (the school) the chicken so they can enjoy it in the garden, in their own backyard and see nature,” Houston said.

Garden coordinator Suzanne Ludlum is thrilled too. “It’s always good to have good news in east Oakland, even if it is chickens,” she said.