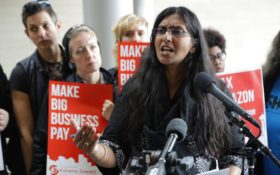 Seattle’s elections watchdog has charged a city councilwoman with violating the law by using her office to promote a potential ballot measure that would tax Amazon and other large companies to pay for things like affordable housing.

The Seattle Times reported the charges against Kshama Sawant were filed Monday by Wayne Barnett, the executive director of the Seattle Ethics and Elections Commission.

In a statement Tuesday, Sawant described the matter as a misunderstanding and said her office has changed its operations to ensure compliance moving ahead.

“I look forward to meeting with the commission to resolve this matter,” said the socialist who won a third term in November following efforts by Amazon and other business interests to oust her.

But Sawant also denounced the charges. ”’It’s shameful that while big business has license to run amok trying to bully or buy politicians … working people have to follow the most onerous of restrictions,” she said.

A hearing before the commission, the group that enforces the city’s elections laws, was scheduled for March 4.

The charges say Sawant broke two laws when her office posted links from her official council website to materials related to her “Tax Amazon” campaign. If the commission determines Sawant committed ethics and elections violations, it could fine her up to $5,000 per violation, Barnett said in an email.

In 2018, the City Council passed the “Amazon tax,” designed to make lucrative companies contribute more to affordable housing for the homeless. It quickly repealed the levy after objections by Amazon, business leaders and some labor groups.

State lawmakers are currently considering a measure that would allow King County, home to big companies like Amazon, Microsoft and Starbucks, to tax such large businesses with high earners to address the region’s homelessness and housing affordability issues.