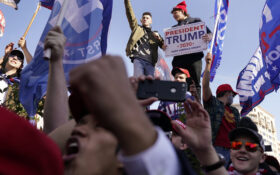 The Million MAGA March drew thousands of protesters toward the nation’s capital to express support for President Donald Trump and his battle to reverse the results of the election.

The event — which included violent clashes between the President’s backers and masked Antifa counter-demonstrators — went viral across the mainstream media airwaves.

But there was another major protest that didn’t get as much attention.

A little more than 250 miles away, the President’s supporters gathered at the home of former Secretary of State Hillary Clinton.

A parade of protesters marched through the street right out front of the Clintons’ home, repeating chants of “USA” and “lock her up,” while carrying both Trump and American flags. The demonstration carried on into the night.

You can watch some of the protest footage below:

Outside Of Hillary Clintons House.pic.twitter.com/ypeJr5ki3d

The demonstration comes amid Hillary’s so-called victory lap. She’s reportedly convinced that Joe Biden has won the election —  bitter since 2016, she’s now gloating. On Nov. 7 when the mainstream media called the election for Biden, Clinton called it a “repudiation of Trump.”

From the looks of the protest, it looks like she’s off the mark.

The demonstrations also come amid recent news that Hillary may be considered for a post in a would-be Biden presidency — as U.S. Ambassador to the United Nations.