Watch this CNN star react to being called a liar (on-air MELTDOWN!) - The Horn News 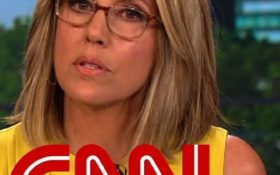 CNN star Alisyn Camerota had a nasty reaction when former New Hampshire Gov. John Sununu called her out on Monday – and video of their heated exchange quickly went viral.

As usual, Camerota wanted her guest to trash President Donald Trump – but she ended up making a fool of herself.

During a segment on the show “New Day”, Camerota invited Sununu on the air with the promise he’d be invited to share his memories of the late Arizona Sen. John McCain, Republican.

But Camerota quickly steered the conversation towards Trump and “anonymous sources” about the White House.

Sununu was having none of it… and when he called out her nasty “fake news” tactics, Camerota was left visibly angry.

“So, governor, what do you think about President Trump rejecting the practice of putting out an official White House statement about John McCain’s service and sacrifice?” Camerota asked.

“Look, that was printed in The Washington Post,” Sununu replied. “I have to be honest with you, I don’t put much credence to what I read in The Post.”

Camerota told the former Republican governor that CNN was reporting the same thing – and Sununu dropped a bombshell.

Being called “fake news” right to her face caused Camerota to have an on-air meltdown.

“I’m saying that I don’t want to comment on a report that I haven’t satisfied myself is correct,” Sununu replied.

“And if that report were true?” Camerota asked.

“I’m not going to answer the hypothetical,” Sununu said.

“It’s not a hypothetical! This is our reporting. We have rock-solid sources in the White House!” a visibily angry Camerota said in response.

“I think this effort to create a cleavage between the White House and those that are mourning John McCain really does disturb me,” Sununu replied. “It is this effort by the press to accentuate the negative that I think have created the climate that prevents, in the long term, the bipartisanship that John McCain supported.”

“I don’t want to be a part of rubbing whatever salt there in whatever wound there may be, because I think that just adds to the division. I’m here because I lost a good friend. I wanted to express my concern about that. … I’m not here to play the political games that some in the press want to play at this moment… over great sorrow for the country.”