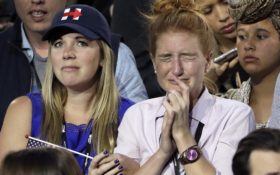 The easily triggered college students of the left won’t let facts stand in the way of their false outrage.

In a hilarious video that’s going viral, students at the University of California, Santa Barbara were hopping mad over President Donald Trump’s plan to send troops to the U.S.-Mexico border just 200 miles away… not knowing they were trashing former President Barack Obama, too.

“It’s not justified!” seethed one of the students. “It is, like, a totally uncalled-for act of power.”

Another came right out and admitted to Cabot Phillips of Campus Reform, who filmed it, that “I’m not a huge fan of the military to begin with.”

The footage shows student after student steaming over the plan to increase border security. Take a look here —

Just one problem: The very act they’re livid over — the actions they blame on Trump — are the same exact moves made by former President Barack Obama, the hero of the young leftists.

When that fact is dropped on them, it leaves the liberals stunned into silence.

Those troops assisted border patrol with more than 17,000 apprehensions of people caught trying to cross illegally.

They also intercepted massive amounts of drugs, including 56,342 pounds of marijuana with a street value of more than $100 million.

Liberals didn’t make a peep at the time!

When told that Obama did the same thing, these young leftists were left stammering and one was literally speechless.

They couldn’t approve the move because Trump did it — but they couldn’t condemn it anymore, either, since their hero did the same thing.

“That’s kind surprising,” was the best response one of the students could manage.

“People have been so conditioned to think anytime they hear ‘President Trump’ they have to oppose it,” Phillips observed in a Fox News interview. “They’re taught in the classroom, they’re taught by society and the media, it must be horrible, it must be racist.”

It’s not just Obama did the same thing.

California Gov. Jerry Brown has also authorized sending National Guard troops to the border both during the Obama administration and now again under Trump.

While his most recent act also involved sending a sulky letter filled with textbook liberal gripes, he also was forced to admit that National Guard troops play an essential role in U.S. border security.

“Your funding for new staffing will allow the Guard to do what it does best: support operations targeting transnational criminal gangs, human traffickers and illegal firearm and drug smugglers along the border, the coast and throughout the state,” Brown admitted in the letter to Trump. “Combating these criminal threats are priorities for all Americans — Republicans and Democrats.”

Quote that letter to the left – tell them Trump said it – and you can bet they would take to the streets.

Resist! Just don’t ask them who or what they’re resisting because clearly, they don’t know.