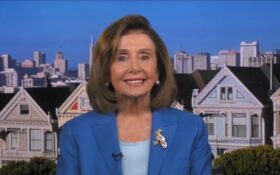 House Speaker Nancy Pelosi, 81, announced Tuesday she will seek reelection, ending speculation that she would retire.

However, she has committed to — and reaffirmed her commitment to — leaving her current position in party leadership.

“While we have made progress, much more needs to be done to improve people’s lives,” the 81-year-old Pelosi said in an online video.

“This election is crucial. Nothing less is at stake than our democracy,” she added, hitting familiar Democrat talking points. “Our democracy is at risk because the assault on the truth, assault on the U.S. Capitol and the state-by-state assault on voting rights.”

Earlier this month in an interview with The Associated Press, Pelosi only hinted at another run, saying she “may” seek reelection.

On one hand, Pelosi may be benefitting other Democrats by seeking a 19th term. She has avoided becoming a lame duck in a year when Democrats are clinging to a fragile majority in the House and the party is under pressure to raise vast sums of money to defend control of Congress.

Her decision to remain in the chamber follows announcements by 29 House Democrats that they won’t seek reelection this year, compared to 13 Republicans as the GOP looks toward taking back the House.

The party that controls the White House typically loses seats in Congress in midterm elections, as part of the negative incumbency effect. This year, Democrats are defending both chambers at a time when President Joe Biden’s approval rating has been slipping.

On the other hand, Pelosi may have posed a risk to other Democrats by continuing her divisive, unpopular reign.

She already seems to have energized Republicans with this video.

In a Twitter post, California Republican Kevin Kiley, a congressional candidate and state assemblyman, said Pelosi’s announcement was “all the more reason we need Republicans in Congress who will fight.”

Pelosi will be an overwhelming favorite in her heavily Democratic district — she won with 78% of the vote in 2020. But she’s also running at a time when her San Francisco district has been criticized for squalor and crime, including daytime shootings in tourist areas, widespread homelessness, and smash-and-grab thefts at high-end stores so brazen they made national news.

Plus, polling data has yet to become available.

In the video, Pelosi neglects to say whether or not she intends to seek another term as the House’s Democratic leader, if reelected.

Pelosi has long refused to put a timeline on her plans to leave party leadership, due to concern over looking like a lame duck. She told a Wall Street Journal reporter in 2020, “I don’t want to undermine any leverage I may have.”

However, Pelosi said in 2018 that she would serve no more than four total terms as speaker.

At the time, she was discussing a proposal for a four-term limit on leadership. She said in a statement, “I am comfortable with the proposal and it is my intention to abide by it whether it passes or not.”

She’s nearing the end of her fourth term now.

In 2020, Pelosi was asked whether she would still abide by this plan. She said, vaguely, “I made the statement.”

Pelosi adds that none of the members who voted for her asked if it would be her last term.

In the event of Pelosi’s departure from the speakership, the Democrats will need to choose a new minority leader or even — God forbid! — a new House speaker.

However, Pelosi’s longtime deputies — Majority Leader Steny Hoyer of Maryland and Majority Whip Jim Clyburn of South Carolina — are also over the age of 80.

Assistant Speaker Rep. Katherine Clark, D-Mass., once seemed poised to become the new leader, but then she became embroiled in a financial scandal.

Pelosi won her first election to Congress in 1986. She has served in party leadership — either as House Speaker or House minority leader — since 2003, for the last 19 years.

While we have made progress much more needs to be done to improve people’s lives. This election is crucial: nothing less is at stake than our Democracy.

But we don’t agonize-we organize. I am running for re-election to Congress to deliver For The People and defend Democracy. -NP pic.twitter.com/ojwFPOdRs3