Watch Nancy Pelosi’s face at 0:21 in this video (she’s SHAKING!) - The Horn News 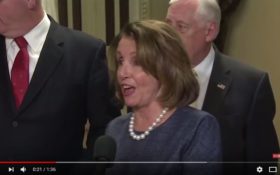 Watch House Minority Leader Nancy Pelosi’s face when she was asked a simple question by one reporter on Monday. Her furious, rambling reply went completely off-the-rails after just 0:21 of the below video.

When Pelosi’s face becomes red when she was given a question suggesting that modest tax cuts for Americans wasn’t the “end of the world,” however… and she went berserk.

Approximately 20 seconds into the video, Pelosi yells: “No, it IS the end of the world! The debate on health care is life and death.”

“This is Armageddon! This is a very big deal. Because, you know why? There’s really a very hard way to come back from this,” she continued.

She promised to re-raise taxes later, and then began visibly shaking with anger.

Pelosi’s face contorts and her hands shake at 1:08 in the video as she condemns Republicans for throwing middle class taxpayers back “crumbs” and says it’s “in their DNA” to give tax cuts to the wealthy. “That’s there purpose in coming to Congress,” she says as her hand violently trembles.

Are Pelosi’s hand tremors more symptoms of her rumored health issues? Or just a result of her hate towards regular American voters?

Either way, someone should remind Pelosi and her supporters that taxes are only the recommended minimum.

Remember that every single Democratic Party member is welcome to pay more if they so choose; the IRS will gladly accept their donations.

The rest of America, though, wants to drain the swamp under Washington, D.C.

To drain the swamp, Trump must starve the bureaucratic beast… by giving Americans back the money they earned.

These may be just “crumbs” to Pelosi, who has an estimated $58 million dollars stashed away.

But to the average voter, tax cuts are important — both fiscally and ideologically.

You can watch Pelosi’s unhinged rant below —