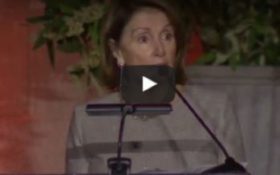 Nancy Pelosi has stumbled into another embarrassing scandal — and the viral video has her team struggling to explain why the House Minority Leader can’t tell fake news from real history.

Critics of the California Democrat have openly speculated about Pelosi’s mental health in recent years. Her latest error-filled speech — an error-filled article about the Founding Fathers — is not going to put those rumors to bed.

Pelosi read “The Price They Paid” to the crowd at a recent Democrat press conference. But fact checkers have pointed out the article was riddled with errors, embellishments, misspellings, and flat-out lies.

“I just want to read this one thing because it’s July,” Pelosi said during the event, pulling out her smart phone. “We came back from the Fourth of July celebration and I saw this article.”

“Now, our founders, they sacrificed their lives, their liberty, their sacred honor to establish this democracy. But did you ever wonder what happened to the 56 signers of the Declaration of Independence?”

She then began reading the faked article to the press, and no one interrupted her.

Supporters of Pelosi have attempted to dismiss the video, saying that the article could fool most Americans who have been away from history class for more than a decade. Critics have responded, however, that a congressional leader should know these things.

The article also frequently misspells the names of several of the signers.

Do you think it’s troubling it is that a leading lawmaker can’t tell the difference between fake news from real American history?

You can watch the video here, then comment below —