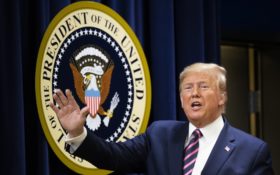 You can watch a live broadcast of the trial below.

The timeline for what American voters can expect this week became clear Monday evening. In a Senate resolution, McConnell laid out the structure for the trial’s opening phase, with votes on witnesses deferred until next week.

The resolution would permit Trump’s lawyers to move early on to acquit the president and sets up a vote next week on calling witnesses such as former national security adviser John Bolton.

How the trial should go under McConnell’s plan:

McConnell’s resolution does not specifically allow for witnesses to testify, and Democrats promise to try to guarantee witnesses, documents and other evidence to be part of the trial. Any debate on these topics must be conducted in closed session under the Senate’s impeachment rules.

After the Senate adopts the organizing resolution, which itself will consume Tuesday, the legal teams for Trump and the House on Wednesday will be able to offer motions on housekeeping questions involving matters other than evidence or witnesses.

In theory, Trump could move to dismiss the case altogether, but that’s unlikely.

House impeachment managers, led by Rep. Adam Schiff, D-Calif., will have 24 hours — packed into only two days — to make their opening arguments. The White House will have the same amount of time to respond, though Trump’s lawyers may not use it all.

Sixteen hours will be reserved for senators to ask questions of both legal teams. Those questions will be posed in writing through Chief Justice John Roberts.

The key question of whether to call witnesses and which ones to call will be considered with up to four hours of argument by the White House and House Democrats.

The Senate may go into closed session to debate further and then have a series of votes. If witnesses are called, they will be deposed before any potential live Senate testimony.

STEP SIX: GUILTY OR NOT GUILTY?

After the Senate finishes its deliberations, it will vote on the two impeachment articles, which requires a two-thirds vote to find Trump guilty and remove him from office.

Trump is likely to be found not guilty.

You can watch the trial live here, beginning at approximately 1:00pm Eastern