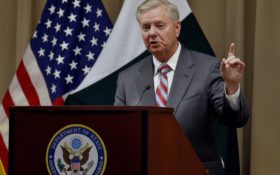 Rep. Lindsey Graham, R-S.C. dropped the hammer to kick off the Senate Judiciary Committee hearing Wednesday, where he crushed the mainstream media for its softball coverage of top corrupt FBI officials.

What he said left conservatives and supporters of President Donald Trump cheering.

His impassioned remarks just before the committee of lawmakers dug in to question Inspector General Michael Horowitz, who concluded and released his report of the FBI Deep State surveillance of President Donald Trump and the origins of former special counsel Robert Mueller’s so-called “witch hunt.”

“Mr. Horowitz,” Graham said, “I’m dying to hear from you, but I bet I haven’t made 20 minutes of opening statements in a year. I’m [going to take] a little bit longer to try to lay out what I think is before us as a nation.”

Graham went to town on the liberal media.

He spoke to the news networks attempting to downplay the corruption of the FBI with misleading headlines that try tricking the American people into thinking nothing happened.

“There has been a lot of media reports about your report before it was issued, and I remember reading all these headlines. ‘Lawful investigation with a few irregularities’, ‘Everything okay, low-level people kind of got off track.’ If that’s what you get out of this report, you clearly didn’t read it.”

“If that’s your takeaway that this thing was lawfully predicated, and that’s the main point, you missed the entire report. How do you get a headline like that? That’s what you want it to be. You want it to be that and nothing more.”

In other words, the liberals tabloids aren’t presenting facts — they’re making their own narrative fit.

“And I can assure you, if this had been a Democratic president going through what President Trump had gone through, that would not have been the headline. The headline would be, ‘The FBI takes law into its own hands: Biased agents cut corners, lie to the court, ignore exoneration.'”

Graham concluded his point with one goal in mind.

“… my goal is to make sure that people, when this is over, whether you like Trump, hate Trump, don’t care about Trump, you look at this as more than a few irregularities.”

“Because if this becomes a few irregularities, in America, then God help us all.”

You can watch Graham’s speech in-full below: