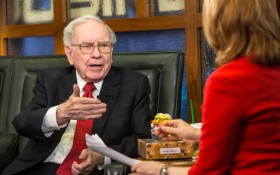 Buffett has always avoided technology companies because he said it was too hard to pick which ones would prevail long term, although he made an exception to that rule to buy a major IBM stake in 2011.

The stake comes with the company’s shares under considerable pressure. Billions in value have been wiped from the books since Apple reported a sizeable drop in iPhone sales in late April.

Shares, down 15 percent over the past month, jumped 3 percent Monday.

Buffett was also reported to be considering joining a bid to acquire Yahoo. But Buffett told CNBC Monday he would only act as a potential financing partner for Quicken Loans founder Dan Gilbert’s bid.

Buffett didn’t immediately respond to a message from The Associated Press early Monday.

Buffett is known for investing in comparatively boring companies when he understands the industry well, such as Geico insurance, Wells Fargo, Coca-Cola, American Express and See’s Candy. Buffett avoids investing in areas outside his expertise.

Whenever Buffett is asked about technology investments, he usually explains his position in terms of candy and soda. Buffett says he thinks it’s too hard to determine what tech companies will be worth in the future because their businesses evolve so quickly, but he’s certain Snickers candy bars and Coca-Cola will remain popular decades from now.

“Whenever you get a truly extraordinary business, they’re the hardest ones to value,” Buffett said last year on CNBC. “It’s much easier for me to figure out what Coca-Cola is worth than Google or Facebook or you name it.”

Berkshire revealed the new Apple investment Monday in a filing with the Securities and Exchange Commission detailing a number of changes to its $129 billion portfolio.

But the filing didn’t disclose who made the Apple investment. Besides Buffett, Berkshire has two other investment managers, who each handle about $9 billion.

Buffett has said that his investments tend to be the larger ones in the portfolio. He says investments of less than $1 billion are likely to be the work of Ted Weschler or Todd Combs. The Apple stake was worth about $900 million on Monday.

Berkshire also added 198,853 IBM shares during the quarter to give it 81.2 million shares. Buffett has stuck with IBM even though it continues to sell for less than the roughly $170 a share he paid for most of the shares.

When Buffett bought IBM stock in 2011, he said he viewed it more as a service business that customers were unlikely to drop than a tech business dependent on selling computer hardware cheaply. IBM focuses more on software and technology services these days.

Besides investments, Berkshire owns more than 90 companies in a variety of industries, including insurance, utilities, BNSF railroad, furniture and jewelry.