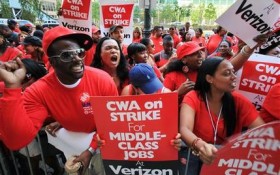 In a move that threatens the phone service of millions of customers along the East Coast, about 39,000 Verizon landline and cable workers walked off the job Wednesday morning after the company refused to meet their demands.

What they want, according to Marc Reed, Verizon’s chief administrative officer, is a bigger increase in their median salary than Verizon is offering. And they’re willing to hold customers phone service hostage to get it.

According to Politico New York, “The company said that the employees in question have a wage and benefit package that averages $130,000 a year,” and that, “Verizon said it had offered a 6.5 percent wage increase over the term of the contract, ‘access to quality and affordable’ healthcare, and a 401K with a company match.”

That wasn’t enough, it would seem.

Standing on a picket line in Manhattan with hundreds of union workers, Keith Purce, president of CWA Local 1101 which represents about 3,500 workers in Manhattan and the Bronx, said they were prepared to stay out “as long as it takes.”

He said talks broke off last week and no new talks were scheduled.

The workers’ latest contract expired in August and so far, the unions and management say negotiations have been unsuccessful.

Verizon said Tuesday that it has worked for more than a year to prepare for the possibility of a strike and has trained thousands of non-union workers to fill in for the striking workers. Employees from other departments across the U.S. also will be sent to replace the striking workers, the company said.

Verizon Communications Inc., which has a total workforce of more than 177,000 employees, said in a statement Tuesday that the company was contacted by federal mediators and is willing to sit down and continue negotiation talks, if the unions agree to hold off on their strike. A spokeswoman for CWA said the union did not authorize the mediators to offer to extend the strike date.