[Warning] Imminent terror attack in the Midwest? - The Horn News 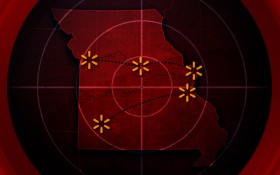 In less than a week, three different Missouri Walmarts reported the same type of suspicious purchase to local law enforcement.

Now the FBI is scrambling to figure out the situation that has some worried of a possible terror connection.

According to reports, a group of Muslim men may have been traveling all across Missouri, buying up large quantities of prepaid — or so-called “burner” — cell phones. Perhaps as many as 150 have been purchased so far.

Burner phones have long been used in criminal conspiracies, because of how difficult they are for authorities to monitor and track.

But most alarmingly, these phones can also be used to trigger explosives, and were widely used during the Iraq and Afghanistan wars as detonation devices for improvised explosive devices (IEDs).

The suspicious behavior was first reported last Friday night around 9:30 pm local time. According to local station KQFX, several men are alleged to have purchased up to 50 cell phones from the Walmart in Columbia, using only cash. Their suspicious behavior worried the cashier, who reported the purchase to local law enforcement.

According to local news station KSPR, at 4:00 am local time – seven hours later – two Muslim men who are thought to be the same group entered a Walmart in Laclede County and used cash to purchase 60 additional disposable cell phones. Police detained the two, but because the purchase is technically legal the police department had no choice but to let the men go.

“I’m not going to say just because they’re a different religion or because they’re Muslim. But these people were, they were foreign-speaking. You need to take notice, you need to let us know about it because it doesn’t hurt to check on it. You’re not being racist or anything like that. You’re just protecting yourself,” said Laclede County Sheriff Wayne Merritt on the detention.

A third large scale burner cell phone purchase was then reported Wednesday at the Walmart in Macon, MO. Store employees reported their suspicions on the group making the purchase to local law enforcement, who notified the FBI.

In the statement, the Macon County Sheriff’s Office said they, “in coordination with the Macon Police Department are investigating the recent suspicious purchase of multiple cell phones made at the Macon Wal-Mart,” and that “Information has been collected and submitted to the FBI Saint Louis Office and Springfield Office.”