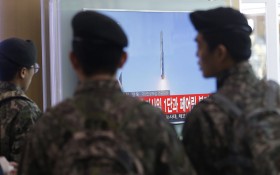 The provocative missile launch in North Korea this weekend shocked many in the international community and was met with strong condemnation around the globe.

But it was also meant to send a message. North Korea believes it’s long-range rocket can now easily target the West Coast of the United States.

Now, in order to stop the mad North, the U.S. may need China’s help.

According to CNN, the missile used was a Unha rocket, believed to be of the Taepodong long-range ballistic missile. These missiles are capable of carrying a nuclear payload an estimated 5,600 miles — putting much of the U.S. West Coast in range. North Korea currently has an estimated 100 nuclear weapons, but had previously no way of aiming them at the mainland U.S.

North Korean leader Kim Jong Un went ahead with the launch just two hours after an eight-day window opened early Sunday, and a month after the country’s fourth nuclear test. He ignored an appeal from China, its neighbor and important ally, not to proceed, and, in another slap to Beijing, he chose the eve of the Chinese New Year, the country’s most important holiday.

In a reflection of heightened hostilities between the rival Koreas, South Korea’s Defense Ministry said a South Korean naval vessel fired five shots into the water as a warning Monday when a North Korean patrol boat briefly moved south of the countries’ disputed boundary line in the Yellow Sea.

At the U.N., the U.S., backed by its allies, Japan and South Korea, wants tough sanctions reflecting Kim’s defiance of the Security Council. But diplomats say China, the North’s key protector in the council, is reluctant to impose economic measures that could cause North Korea’s economy to collapse — and a flight of North Koreans into China across their shared border.

The 15-member Security Council strongly condemned the launch and pledged to “expeditiously” adopt a new resolution with “further significant measures” — U.N. code for sanctions. The word “robust” referring to the measures was in an initial draft, but was dropped in the final statement.

U.S. Ambassador Samantha Power told reporters that “it cannot be business as usual” after two successive North Korean acts that are “hostile and illegal.”

“What’s important is that the Security Council unites,” Power said. “China is a critical player. … We are hopeful that China, like all council members, will see the grave threat to regional and international peace and security, see the importance of adopting tough, unprecedented measures, breaking new ground here, exceeding the expectations of Kim Jong Un.”

He said a new resolution should “do the work of reducing tension, of working toward denuclearization (of the Korean peninsula), of maintaining peace and stability, and of encouraging a negotiated solution.”

“I believe the council needs to work together for a new resolution,” Liu added, indicating that China may want negotiations with the United States to be widened.

North Korea, which calls its launches part of a peaceful space program, said it had successfully put a new Earth observation satellite, the Kwangmyongsong 4, or Shining Star 4, into orbit less than 10 minutes after liftoff, and vowed more such launches.