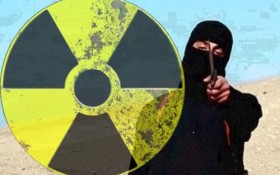 Officials are desperately scrambling to locate “highly dangerous” radioactive material that went missing after a brazen theft from an Iraqi oil field last year, and it has raised fears among security experts that the material has fallen into the hands of ISIS.

That means ISIS may now have the capability to explode a so-called radioactive “dirty bomb.”

According to Reuters, 10 grams of Ir-192 was stolen from a storage facility that is operated by the U.S. oil company Weatherford near the Iraqi city of Basra. The theft has been confirmed by numerous senior officials in the country, according to their report.

The International Atomic Energy Agency reports that this amount of Ir-192 is a Category 2 radioactive material, and exposure “could cause permanent injury to a person who handled it or who was otherwise in contact with it for a short time (minutes to hours). It could possibly be fatal to be close to this amount of unshielded radioactive material for a period of hours to days.” and a capsule of this substance is radioactive up to 100 meters if dispersed.

“We are afraid the radioactive element will fall into the hands of Daesh,” a senior security official told Reuters, using an alternative acronym for ISIS.

“They could simply attach it to explosives to make a dirty bomb,” Reuters reported the official said.

The terror group has a history of using weapons of mass destruction in the past. The Organization for the Prohibition of Chemical Weapons has confirmed that ISIS used mustard gas on Kurdish forces last August.

Just Friday of last week, a Kurdish military officer and a medical official say Islamic State militants fired mortar shells believed to have been filled with a chemical weapon, possibly chlorine gas, at Kurdish troops close to the Iraqi town of Sinjar.

Dr. Afrasiab Mussa Yones, director of Dohuk hospital, told The Associated Press in an article Thursday that nine Kurdish soldiers were admitted with symptoms including vomiting, nausea, shortness of breath and itching, symptoms that suggest chlorine was used.