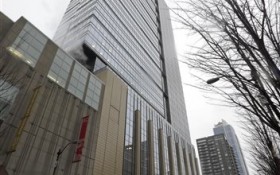 As many as 200 people have gotten sick in a norovirus outbreak at a downtown Seattle office building, health officials reported Monday.

Illness at the Russell Investments Center grew exponentially after a catered event in the building, but several cases were reported before the event last Tuesday, according to Public Health-Seattle & King County, which is still investigating the outbreak that began last week.

Between 175 and 200 cases have been reported to the health department either independently or through a survey of people who went to the catered event in the building.

Two people spent one night in a hospital because of norovirus, and another eight people were treated in emergency rooms during the past week.

Norovirus is very common, and more than a dozen outbreaks are confirmed or probable in the county each year, Kay said. “This time of year, norovirus can spread person-to-person very quickly,” she said.

The building was thoroughly cleaned over the weekend, and all food service in the building has been shut down by the health department.

Norovirus is highly contagious and quickly causes sickness. Norovirus causes nausea, vomiting and diarrhea, which can lead to serious dehydration. People are likely to be sick for just a few days.

It can spread through food and water or from person to person and is commonly associated with large gatherings of people at events and community centers and daycares.

“Door knobs, handrails, all of those things can easily get contaminated,” Kay said. “It may be it is something that’s still out there.”

Health officials warned that people can continue to spread norovirus for weeks after symptoms are over so they should continue to be careful about handwashing and sanitation.