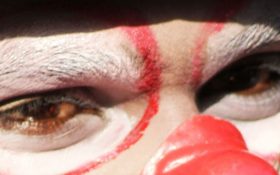 It sounds like something out of a twisted Hollywood horror movie.

Families in the Greenville, SC area have been on edge for weeks over reports of adults in clown costumes trying to lure children into nearby woods.

Now, sightings have been reported in a second state.

Police say they are doing extra patrols in a Winston-Salem, NC, neighborhood after two children reported seeing a clown trying to lure kids into the woods with treats.

Police said in a news release that officers were called to the area around 8:30 p.m. Sunday.

Authorities say two children said they saw the clown, and one adult reported hearing the clown.

About four hours later, a caller who refused to give a name reported seeing a clown about 2 miles away.

To date, police in both North Carolina and South Carolina remain baffled by the case. But it may be a good time to have a refresher conversation with children and grandchildren about interacting with strangers.