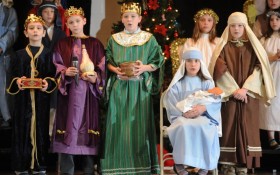 Anti-religion activists never seem to rest, and their newest target is an annual tradition celebrated across the country at thousands of schools.

But if the notorious Freedom From Religion Foundation (FFRF) has its way, Christmas plays will be banned for good. In response, thousands of angry parents are gathering up petition signatures to fight back.

The organization initially targeted 25 schools throughout Oregon and Washington state in 2013, demanding their Christmas pagents be cancelled.

In Portland, the school board of Grant High School just upheld their decision to remove their annual holiday tradition, the Festival of Lights at The Grotto, in a 4-3 vote.

Some board members cited concerns over the cost of a lawsuit when they referenced their decision. Board member Pam Knowles voted against the resolution, saying, “Why would we want to place the burden of saying no on our children?”

On the other side, board member Tom Koehler said he didn’t feel that The Grotto performances violated the constitution.

And over 3,600 angry parents agreed with him. In this online petition, graduates of the Grant High are calling for a restoration of the concert tradition.

So many opportunities for music in Public Schools are being taken away. Please don’t take this too! If a student doesn’t want to sing at The Grotto, why can’t they speak to their choral director and work something out? Why can’t this be handled on an individual case-by-case basis?  I feel  that your decision was unnecessary and I hope you will reverse it!