Wall Street Journal just shocked EVERYONE (they said... what!?) - The Horn News 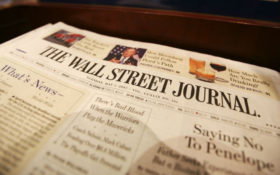 When you wake up on November 4, there’s a better chance than you think that your president will be Bernie Sanders.

That’s not my judgment; that’s the prediction — the warning, really — of the granddaddy of all fiscal conservative publications, The Wall Street Journal.

The newspaper ran an op-ed this week titled “Be Prepared for President Sanders”… and it’s not because the hedge fund managers want it.

Bernie in the Oval Office? Before you laugh, take a look at the facts.

But unlike the candidates who spend their time romancing the “billionaires in wine caves” crowd, most of Sanders’ haul came from small donors sending him small bills—less than $20 on average.

That means his small army of donors can keep giving, and giving, after Democratic billionaire donors are tapped out.

Second, there’s Bernie’s high ranking in the polls. Sanders “has run second, behind Joe Biden, in national polls for most of the past year,” WSJ writer John Riley begins.

But national polls don’t matter, because you win the presidential nomination one state at a time—and that’s what’s got everyone jittery. Because third, there’s Bernie’s standing in the early states.

Sanders usually ties for first place in Iowa (with Joe Biden and Pete Buttigieg). He dominates in New Hampshire, which is practically the Vermont senator’s home state.

Even if he loses South Carolina, winning the first two state contests would let Sanders bulldoze into Super Tuesday with a head of steam.

There are 15 states holding an election that day—March 3—and he only needs 15 percent to pick up delegates.

All of the candidates will be clawing it out to reach that threshold at the same time…and that’s where that excess cash is going to come in handy, as Sanders wages his private fight for 15.

Sanders has one more thing going for him: His organized support looks tailor-made to dominate caucuses, which reward the person who has the most dedicated followers (or who pays people never to switch candidates).

Obama hates Sanders and his insiders have tried rigging the nomination against Sanders again, like in 2016.

Democratic insiders think Sanders’ strength will last all the way to Milwaukee, where they’ll head into a brokered convention. Then they plan to have superdelegates tip the vote against Bernie, in favor of another candidate who is close enough that it won’t start a revolution…or a candidate who isn’t even on the ballot, like Michelle Obama or Hillary Clinton.

But the Bernie Bros might bust through that deadlock by refusing to let the party play them again.

“It’s possible that the Democratic establishment could turn on Bernie like it did four years ago,” Riley writes. “But that runs the risk of alienating his large and enthusiastic base of supporters, and it’s hard to see Democrats beating Mr. Trump without the Sandernistas chipping in.”

If Sanders gets the nomination, won’t the election be a cakewalk for Trump? It should be—but not so fast.

Polls of a hypothetical Trump-Sanders match-up have been everywhere for months. But they’ve been too close for comfort. Right now polls range from Sanders beating Trump by eight points to Trump winning by five.

The Democratic Party insiders know this; they just don’t want to hear it.

“You can give them all the polls that have ever been conducted that show that Bernie Sanders would beat Trump, they just don’t want to believe it,” left-wing journalist Ryan Grim told The Hill.

Sanders is different—and threatening—because he pays lip service to the same voters who back Donald Trump. He says he says he wants to bring back manufacturing jobs, get America out of endless wars, care for veterans (even a veteran who threatened to commit suicide at one of his rallies), and—unlike every other Democrat on the stage—he says he’s against open borders.

Riley says that Trump can’t take a single vote for granted in 2020, because “in a country this divided…the plain truth is that the president is vulnerable to anyone his opponents nominate. Which is all the more reason for journalists to stop treating the Sanders candidacy as a sideshow.”

Bernie Sanders would be a terrible president — one who idolized Communist dictatorships, demonized the Constitution, and wants to turn the USA into the Union of Sanders’ Socialist Republics.

The only thing standing between him and the Oval Office is his ability to beat his own party… and the possibility of peeling off enough Trump supporters to win in November.