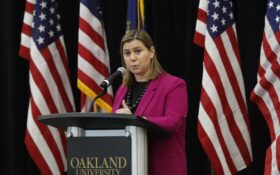 In less than a month, Americans will vote in the midterm elections, and political candidates have been participating in debates as part of a final push.

In competitive races for Michigan and Wisconsin, the candidates have turned debates into a spectacle.

Rep. Elissa Slotkin, D-Mich., ranks as one of the House’s most vulnerable Democrats. Slotkin unseated an incumbent Republican during 2018’s blue wave, and she survived re-election in 2020. That year, she became one of only seven Democrats to represent a district won by former President Donald Trump. After the election, she angered certain colleagues by blaming the House Democrats’ losses on political correctness.

Earlier this month, Slotkin was debating her Republican opponent… and she made herself look terrible.

More specifically, Slotkin berated the moderator for spending too little time on abortion.

She’s been raising the salience of this issue during her campaign. Earlier this year, she went viral for a tweet about her state’s longstanding “trigger law” banning abortion in the event of a Roe v. Wade reversal.

After the debate, Slotkin confronted the moderator, Tim Skubick of WLNS, for asking too few questions about abortion.

Skubick argued that Slotkin had already addressed this issue elsewhere, including in a previous debate. Slotkin pointed out that the previous debate appeared only on local broadcasts for a different city.

“You’re better than that,” Slotkin told the moderator. “This media market has never seen us debate. Ever. Not once. Not one minute.”

“My object here tonight is to break new ground on new issues that the first debate didn’t touch,” the moderator said. “We may agree to disagree respectfully on the abortion issue, but aren’t you running ads on the abortion thing against him?”

“Tim, this is a debate. We’re all running ads,” Slotkin replied. “This is a debate for an hour in a media market that has never seen us debate on an issue that is literally between number one or number two top issues we’re hearing at the doors. And so I just agree to disagree.”

The moderator replied, “I thrive on the fairness thing. If you feel I didn’t do a good job –”

Slotkin interrupted, “It’s not that you raised it for him and not for me. It’s not a fairness issue. It’s just sort of reflecting the news of the day.”

“I think where we disconnect is, I hate seeing debates where the same issues go over and over,” Skubick concluded.

If tonight’s news is true, Michigan’s 1931 state law banning abortion would snap back into effect, making any abortion illegal in our state — even if the mom will die, or if she was raped by a family member. No exceptions. 1/2

In Wisconsin, the two candidates for U.S. Senate staged a similarly contentious debate.

Republican U.S. Sen. Ron Johnson and Democratic challenger Mandela Barnes got personal in their final debate Thursday before the Nov. 8 election, with each candidate attacking the other as being a liar, radical and out of touch with the average Wisconsin voter.

Both candidates got personal.

Johnson, who is seeking a third term, and Barnes, the lieutenant governor, are locked in a tight race that could determine which party controls the Senate. The debate in Milwaukee came a day after a Marquette University Law School poll showed Johnson with an apparent lead, marking a steady increase for the incumbent since Barnes won the Democratic primary in August.

Johnson said he was proud of his accomplishments, citing a right to try law that allows for patients to use experimental treatments, and the Joseph Project, an effort Johnson started to connect poor and disadvantaged people in Milwaukee with jobs.

Johnson said Barnes “has no accomplishments whatsoever. All he has is lies and distortion. … Has the lieutenant governor ever created a job?”

Barnes has touted his middle-class upbringing, with his father working third shift and his mother being a public schoolteacher.

There seems to be a pattern.

Georgia’s Senate candidates will debate Friday night, as part of a close race marred by controversy.