VP Pence riles up GOP base in Florida - The Horn News 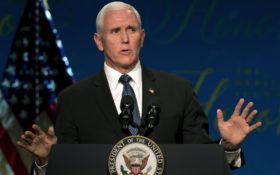 Vice President Mike Pence visited Florida’s Tampa Bay area on Wednesday, firing up the Republican party’s conservative base while touring a pregnancy center, speaking at a church and making an appearance before a packed ballroom.

Pence’s visit highlighted his anti-abortion and conservative Christian stance, courting religious voters in part by seeking to posit Democrats as a threat to religious freedom. He made the trip with his daughter, Charlotte Pence Bond.

He told about 200 people in the crowded ballroom at the Hilton in Clearwater that during this election, America is at a crossroads between “a society grounded in freedom” versus one grounded in “socialism.”

“The choice we face is whether America will remain America,” he said.

Pence came on and hammered Biden for his views on cutting funding for law enforcement, claiming that he said he would cut police funding.

“We will always back the blue,” Pence said to raucous applause. “We’re not going to defund the police. Not now, not ever.”

Biden has said he supports redirecting some police funding to address mental health or to change the prison system. On June 8, Biden’s campaign released a statement explaining he does not support defunding police forces.

Earlier in the day, Pence toured A Woman’s Place Medical Clinic — a pregnancy center with an anti-abortion stance.

According to the Susan B. Anthony List, a group opposed to abortion that hosted Pence on Wednesday, he is the first sitting vice president to visit a pregnancy center. George W. Bush visited one post-presidency, and Ronald Reagan praised pregnancy centers.

Pence also attended an anti-abortion event at a church. About 50 people attended, with many dressed in blue “I VOTE PRO-LIFE” T-shirts. He said that if Biden is elected, he would “undo all the progress” the anti-abortion movement has made in the U.S. since the 1973 passage of Roe vs. Wade, which established abortion rights nationwide.

“Life is winning in America,” Pence told the crowd.

Pence said that conservatives should be worried about Democrats electing liberal judges who could rule in favor of abortion rights.

Although far from a certainty, even with increased conservative clout on the Supreme Court, any reversal of Roe would mean abortion policy would revert to the states, and many would be eager to impose bans.

A full-fledged turning back of the clock to 1973 would be unlikely, according to experts.

“It is not to promote inclusion, it is a political stance to try to get votes and not pay attention to what’s happening in our country — what’s happening to the dismantling of the Affordable Care Act, that was meant to help people who need those services, who can afford health care,” said the Rev. Gina Durbin, King of Peace, St. Petersburg. “This current administration does not have the best interests of those who are on the margins.”