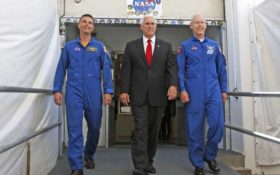 Vice President Mike Pence got an insider’s look at Kennedy Space Center on Thursday and promised more glory days ahead for “this gateway to the stars.”

“Here from this bridge to space, our nation will return to the moon, and we will put American boots on the face of Mars,” he added, drawing cheers and applause from the hundreds of space center workers, astronauts and dignitaries.

The highlight of Pence’s afternoon tour – his second NASA stop in as many months – was his address to approximately 1,200 people inside the massive Vehicle Assembly Building, once used to stack moon rockets and space shuttles. The backdrop included three capsules: the first SpaceX Dragon to carry supplies to the International Space Station, NASA’s Orion that flew into space on a test flight, and a training version of Boeing’s Starliner crew vessel.

Later, Pence got to see an Orion spacecraft being prepared for flight in 2019 atop NASA’s as-yet-unflown megarocket, the SLS or Space Launch System. He was driven past the former shuttle launch pad that will serve as the departure point for SLS flights, as well as the pad from which astronauts rocketed to the moon and space shuttles soared, now leased by SpaceX.

On Wednesday night, SpaceX successfully launched a Falcon rocket with a communications satellite, and so the pad was empty Thursday. Pence said he was sorry to have missed the launch.

“I was praying for rain at the Kennedy Space Center so we might see that rocket go up today,” he said.

Last month, Pence visited Johnson Space Center in Houston to help introduce America’s newest astronauts. Florida’s Kennedy was the second stop on his grand NASA tour. It is NASA’s launch hub, but hasn’t seen any astronaut takeoffs since the shuttles retired in 2011. Boeing and SpaceX are working to change that with their own crew capsules.

This wasn’t Pence’s first visit to Cape Canaveral. He attended several launches as a congressman and recalled how his son, now a Marine aviator, was inspired by seeing a liftoff up close.

Pence said he will convene the National Space Council “before the summer is out.” This is its third reincarnation; it was abandoned in 1993 under the Clinton administration. Since then, Pence said, “our government’s commitment” has not matched the level of excitement for space that exists among the general public. He said that will change and repeatedly called this a new era of American leadership in space.

NASA is shooting for astronauts at Mars sometime in the 2030s, using Orion, the SLS rocket and other craft. As for the moon, President Barack Obama in 2010 canceled the Constellation program, a back-to-the-moon effort championed by his predecessor.

America won the race to the moon in 1969, Pence reminded everyone. “We will get back to winning in the 21st century and beyond,” he said.

Pence got a treat after touring the Orion processing center. Flanked by two current astronauts, he walked down the hallway and out the door once used by Apollo and shuttle crews on their way to the pad on launch day. Kennedy Space Center’s director, Robert Cabana, a former shuttle commander, exited the same way a few minutes earlier, accompanied by NASA’s acting administrator Robert Lightfoot.

“Just like going out in a launch,” Cabana told the photographers and reporters huddled at the end of the walkway.