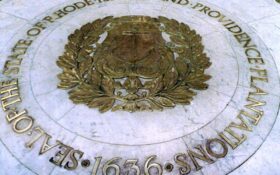 The smallest state in the country will no longer have the distinction of also having the longest official name after voters approved a statewide referendum to strip the words “and Providence Plantations” from Rhode Island’s formal name — the culmination of a long running debate revived amid the nation’s reckoning with racial injustice.

Officially, Rhode Island was incorporated as The State of Rhode Island and Providence Plantations when it declared statehood in 1790.

Although the word “Plantations” in Rhode Island’s name does not specifically refer to a place where slaves labored, the measure’s backers insisted it still offends, especially since Rhode Island’s ties to the slave trade are undeniably deep.

Merchants from the state played a key role in the transatlantic slave trade, launching more than 1,000 voyages to buy and transport slaves from Africa to the Americas.

A similar ballot question was defeated a decade ago, but the campaign was resurrected earlier this year.

State Sen. Harold Metts, D-Providence, a Black lawmaker of Cape Verdean descent who led the push to purge the state’s name of “Plantations,” called it “a hurtful term to so many of us.”

In a separate move in June, Democratic Gov. Gina Raimondo signed an executive order to remove the phrase “and Providence Plantations” from some official documents, including state employee paychecks, and executive agency websites.

But in a stunning rebuke of local Democratic leadership, House Speaker Nicholas Mattiello lost to Republican activist Barbara Ann Fenton-Fung, who outpolled him in a district in western Cranston that backed Donald Trump for president for a second time.

“While I wish last night’s outcome had been different, it in no way diminishes the privilege of serving in the House for so long,” he said in a statement. “It’s been a good run.”

Fenton-Fung said she looked forward to helping reform the state and continuing her husband’s legacy in Cranston. Fenton-Fung is the wife of two-time GOP gubernatorial candidate and longtime Cranston Mayor Allan Fung, who remains popular but is term limited.

“People rejected the way Speaker Mattiello was running the Statehouse and running campaigns,” she told reporters after Mattiello conceded. “We were looking forward to the future and we literally outworked him.”

Republicans are vastly outnumbered in the state Legislature, but Fenton-Fung’s victory Tuesday is sure to trigger a power struggle among House Democrats, who have already called for a caucus at a hotel in Warwick Thursday evening. The formal vote for House speaker, however, won’t happen until January, when the new legislature convenes.

House Majority Leader Joseph Shekarchi, who is Mattiello’s second-in-command and called Thursday’s meeting, has, as expected, put his name in the running for House speaker, which is considered one of the most powerful offices in the state due to the chamber’s control of the state budget process.

The Warwick Democrat, who was first elected in 2012, has promised to reform the “way that business is done at the State House” and touted early support from nearly 20 female state lawmakers.

Mattiello rose to House speaker in 2014 after then-Speaker Gordon Fox resigned amid a public corruption investigation. First elected in 2006, he had served as majority leader under Fox, who was ultimately sentenced to three years in federal prison for accepting bribes and using campaign funds for personal expenses.

During the campaign, Fenton-Fung, a 39-year-old physical therapist, repeatedly called attention to scandals that have dogged Mattiello in recent years, including the money laundering trial of former campaign aide Jeffrey Britt.

More than 480,000 voters cast ballots, besting the state’s previous all-time high of more than 475,000 in 2008, when Democrat Barack Obama was elected president, according to preliminary tallies from Secretary of State Nellie Gorbea’s office as polls closed Tuesday.

The office said the final voter turnout count would be higher as provisional ballots and other ballots cast by mail and in person would be added to the overall count Wednesday.

Elections officials had cautioned that results for some races might not be knowable on election night because of expected tabulation delays following a surge in mail-in and early in-person votes due to coronavirus concerns.

The outcome of the presidential race was in little doubt in Rhode Island, where Trump lost to Hillary Clinton by more than 15 percentage points in 2016. Rhode Island has backed a Republican for the White House only four times in the modern era — twice for Dwight D. Eisenhower in 1952 and 1956, once for Richard Nixon in 1972 and once for Ronald Reagan in 1984.

Reed, first elected to the Senate in 1996, is a senior member of the powerful Appropriations Committee and a ranking member of the Armed Services Committee. Rhode Island’s other U.S. senator, Democrat Sheldon Whitehouse, isn’t up for reelection until 2024.