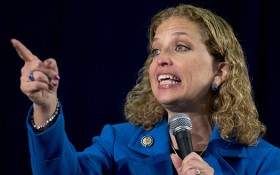 That’s the message that thousands of American voters are sending in a new online movement designed to force Wasserman Schultz out of office.

An online petition on RootsAction, an grassroots political action website, has quickly garnered nearly 30,000 signatures from voters claiming that Wasserman Schultz, who is also a Congresswomen from Florida, is running a rigged nomination process designed to benefit Clinton.

Even Democratic insiders have claimed that Wasserman Schultz, who was co-chair of Clinton’s doomed 2008 presidential bid, is too close to Clinton to be objective.

“She’s acting as a shill for Hillary Clinton, doing everything in her power to ensure that no one will effectively challenge Hillary’s coronation as the nominee,” attorney and activist Miles Mogulescu wrote in a recent Huffington Post blog.

Wasserman Schultz has been accused of limiting the number of Democratic debates to keep Clinton challengers from chipping away at her lead.

And, most recently, Wasserman Schultz was criticized for revoking the Bernie Sanders campaign’s access to a voter database over a data breach that was partly the DNC’s fault.

“It’s bad enough that her incompetent leadership contributed to Democrats losing the Senate,” one angry petition signer wrote. “But her corrupt collusion with Hillary Clinton to steal the Democratic nomination means she needs to go now!”