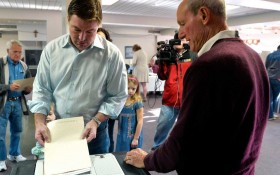 With millions of Americans taking to the polls, there were just over 50 reports that trickled into the Kentucky’s voter fraud complaint board regarding a myriad of issues, such as illegal electioneering as well as simple voter procedural questions. Besides some minor glitches in certain precincts, things ran smoother than normal Fayette County Clerk Don Blevins Jr. told Kentucky.com.

“Sort of normal stuff, with a couple of precincts late getting started because machines were hooked up incorrectly, but after 45 minutes in, everything was up,” Blevins said. “If anything it’s been calmer than usual.”

In total, there were only 52 total calls of various forms to the voter fraud hotline from 27 counties throughout the State spread among the 3.2 million registered Kentucky voters.

Voters called in with complaints of election officials, a few reports of electioneering and disrupting polls, as well as with questions on absentee ballots and voter procedure.

Electioneering, the act of trying to persuade votes towards a specific election campaign, is illegal within 100 feet of polling stations.

Citizens in Kentucky are encouraged to call the State Attorney General’s hotline at 1-800-328-8683 to report any election fraud.

At the top of Kentucky’s general election was the hotly contested governor’s race that saw Democrat Jack Conway defeated by Republican Matt Bevin in a pivotal off-year election. Bevin, a Tea Party Republican, will succeed Democratic Gov. Steve Beshear, who could not seek re-election because of term limits.

Their campaigns turned into a referendum on President Barack Obama’s signature health care law, the Affordable Care Act, and Bevin’s victory could be seen as a test before the larger national election in 2016.

Outgoing Gov. Steve Beshear used an executive order to expand the state’s Medicaid program to cover an additional 400,000 Kentucky residents and create a health exchange, where more than 100,000 people have purchased discounted health plans with the help of federal subsidies.

Bevin, a Louisville businessman, has promised to scale back the expansion and eliminate the exchange, saying taxpayers can’t afford it.