Vote now! Who won the GOP debate? - The Horn News 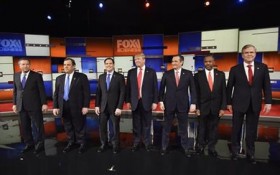 And while sparks continued to fly between the two men, pundits say that other candidates like Florida Sen. Marco Rubio and New Jersey Gov. Chris Christie had breakout moments of their own.

Now we want to hear your opinion. Vote on who you think won the debate last night below: