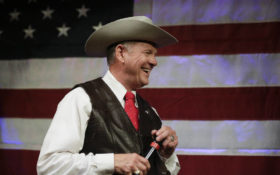 Alabama voters headed to the polls Tuesday in Alabama’s special Senate election and faced two choices: Either continue the “Trump miracle” in Washington or allow Democrats to prevail in Washington, D.C.

At the center is Roy Moore — “Judge Moore,” to his supporters. The 70-year-old Republican has been under siege by the mainstream media over sexual misconduct allegations, which he has denied.

Banana image will SHOCK you [sponsored]

Al Bright, 63, who does refrigeration repair, voted for Moore.

“I just believe regardless of the allegations against him, I believe he is an honorable man,” Bright said.

Bright said he realized some people criticize Moore because he was removed from office because of actions he took to try to block same-sex marriage in the state.

“I don’t think there’s anything wrong with that because I believe in that as well,” he said. “I feel the same — marriage is between a man and a woman.”

Mary Multrie, 69, who works at a children’s hospital and voted for Jones, said she was not influenced by accusations of sexual misconduct against Moore because she already did not like him. “He’s not a truthful man,” Multrie said of Moore. “He talks about God, but you don’t see God in his actions.”

Alabama Secretary of State John Merrill said early Tuesday that turnout for the special election could be as high as 25 percent of registered voters.

The winner will take the seat previously held by Attorney General Jeff Sessions. Republicans hold a narrow 52-48 Senate majority. A routine election in Republican-dominated Alabama wouldn’t be expected to alter that balance because Alabamians haven’t sent a Democrat to the upper chamber of Congress since 1992. President Donald Trump notched a 28-point win here in 2016 and remains popular in the state.

But the attacks against Moore leaves the outcome enough in doubt that both Trump and his Democratic predecessor, former President Barack Obama, have weighed in with last-minute robocalls trying to sway voters.

In his final pitch before polls opened across the state at 7 a.m. CST Tuesday, Jones called the choice a “crossroads” and asked that “decency” prevail.

Can You Identify This Rock? Find Out Here [sponsored]

At his own election eve rally, Moore again denied all the allegations, calling them “disgusting” and offering voters a clear measure: “If you don’t believe in my character, don’t vote for me.” Earlier in the day, Moore cast himself as the victim. “It’s just been hard, a hard campaign,” he said.

For Alabama, the outcome could be defining.

Democrats and establishment Republicans see an opportunity to reject a politician who is already regular fodder for late-night television.

Many voters, however, see an opportunity to defend the state’s conservative, evangelical bent in the face of unfair liberal criticism while delivering another victory for Trump and sending an anti-establishment senator into a federal government that has been reflexively unpopular among Alabama majorities for generations.

Trump’s campaign architect and former White House adviser Steve Bannon told Moore supporters Monday evening the race is a “national election” that will determine whether the “Trump miracle” continues. Moore says he is aligned with the president and he makes similar arguments to Trump, blasting “the elite” in the “swamp” of Washington, D.C.