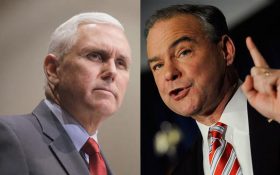 Taking the stage tonight are their vice presidential candidates, and the tight race certainly adds historical significance to tonight’s debate.

Some things to watch for in Tuesday’s debate at Longwood University in Farmville, Virginia.

Pence and Kaine have campaigned full tilt for more than two months now, but plenty of people still don’t have a feel for them. In a recent Associated Press-GfK poll, more than half of registered voters said they didn’t know enough about Kaine to venture an opinion about him, and about 44 percent said the same for Pence. This is their big moment to show they’re qualified to be next in line to the president.

Pence and Kaine have to decide whether to focus more on one another or on Trump and Clinton. Watch how they toggle between the two tasks. Look for Pence, who calls Clinton “the most dishonest person ever to seek the presidency,” to zero in on lines of attack that Trump hardly touched in the first debate, such as questions about whether Clinton played favorites as secretary of state with donors to the Clinton Foundation. Kaine will try to act as a character witness for Clinton and go after Trump, of whom the senator says his “only recognized passion in his life has been for himself.”

Pence could well be asked about Trump’s tax strategy after The New York Times reported over the weekend that the billionaire businessman used a clever strategy to avoid any federal income tax liability for 18 years, which Trump says was his fiduciary responsibility as a businessman. With an audience of millions, will Pence echo Trump’s claims that he used the tax laws “brilliantly?” or try some other tack?

Expect both Pence, an evangelical, and Kaine, a former Catholic missionary, to showcase their religious backgrounds in an effort to appeal to different constituencies. Pence likes to say of himself: “I’m a Christian, a conservative and a Republican — in that order.”

Past vice presidential debates have provided some memorable lines. Republican Bob Dole’s cutting quip in 1976 about all the Americans killed in “Democrat wars” did him no good. Democrat Lloyd Bentsen’s 1988 putdown of Republican Dan Quayle with his “You’re no Jack Kennedy” line still singes. Third-party candidate James Stockdale’s rambling 1992 opening questions of “Who am I? Why am I here?” captured a candidate who was clearly out of his element. Four years ago, Vice President Joe Biden’s denunciations of Republican Paul Ryan’s budget math as “a bunch of malarkey” showed considerably more spark than did President Barack Obama’s leaden performance against rival Mitt Romney in the leadoff presidential debate.

CBS News’ Elaine Quijano will be under the microscope as moderator, especially since Trump has complained that NBC’s Lester Holt, the moderator of last week’s debate, was biased against him.

We want to hear from you. Share your opinion on who will win, vote here —