Vote now! Who do YOU think won the GOP debate? - The Horn News 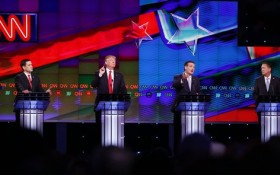 Last night, frontrunner Donald Trump was joined on stage by presidential rivals Sen. Marco Rubio, Gov. John Kasich, and Sen. Ted Cruz, and the civil contest in Miami marked a sharp course correction after the last GOP debate, which devolved into a series of juvenile personal insults that left some Republicans cringing.

Thursday’s debate, the 12th for Republicans this primary season, came at the most pivotal moment of the tumultuous GOP race. Trump leads his rivals in the all-important delegate count after 24 voting contests, but the presidential nomination is still far from decided.

We want to hear from you. Vote below and tell us who you think came out on top of last night’s Republican debate: