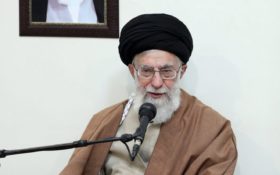 Iran’s supreme leader on Tuesday blamed the violent protests against the country’s autocratic regime on “enemies of Iran” who he said were meddling in its internal affairs, as state television reported that overnight clashes between protesters and security forces killed another nine people.

The demonstrations, the largest seen in Iran since its disputed 2009 presidential election, have brought six days of unrest across the country and resulted in at least 21 deaths.

The people of Iran are finally acting against the brutal and corrupt Iranian regime. All of the money that President Obama so foolishly gave them went into terrorism and into their “pockets.” The people have little food, big inflation and no human rights. The U.S. is watching!

Indeed, the protests began Thursday in Mashhad over Iran’s weak economy and a jump in food prices. They have since expanded to several cities, with some protesters chanting against the government and the supreme leader, radical Islamist Ayatollah Ali Khamenei. Hundreds of people have been arrested and a prominent judge on Tuesday warned that some could face the death penalty.

In comments posted to his official website, Khamenei appeared to blame foreign nations for at least exacerbating the unrest gripping Iran.

“In the recent days’ incidents, enemies of Iran utilized various means — including money, weapons, politics and intelligence apparatuses — to create problems for the Islamic system,” he said, in his first public remarks since the demonstrations began.

Khamenei said he would elaborate further in the coming days. Iranian leaders often accuse the United States, Israel and Britain of seeking to overthrow their brutal regime.

State TV reported that six people were killed during an attack on a police station in the town of Qahdarijan. It said the clashes were sparked by rioters who tried to steal guns from the police station.

The towns are all in Iran’s central Isfahan province, some 215 miles south of Tehran.

The semi-official Mehr news agency said an assailant using a hunting rifle killed a government agent and wounded three others in Najafabad.

Rouhani and others have warned that the government wouldn’t hesitate to crack down on those it considers lawbreakers. None of the protest rallies so far have received prior permission from the Interior Ministry, making them illegal.

The head of Tehran’s Revolutionary Court reportedly warned Tuesday that arrested protesters could potentially face the death penalty when they are put on trial.

“Obviously one of their charges can be Moharebeh,” or waging war against God, Iran’s semi-official Tasnim news agency quoted Mousa Ghazanfarabadi as saying. Moharebeh is punishable by death in Iran. He was also quoted as saying some protesters will come to trial soon on charges of acting against national security and damaging public property.