[Video] Young girl punched in the FACE by adult… for WHAT!? - The Horn News 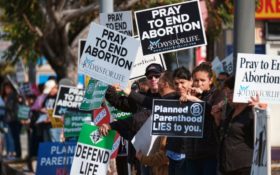 Students for Life of America has just released a video that has Americans disgusted — and liberals worried.

A pro-life high school student, Purity Thomas, spent Saturday standing outside of a Planned Parenthood in Roanoke, Virginia in an effort to prevent abortions.

And it drove one liberal bystander into a rage.

Video captured the moment women walked threateningly over to Thomas and threatened to “beat her up”.

The teenager was trying to pray over the hearts of women who felt they had no other option — a young woman concerned about the future of our country speaking out through peaceful protest. And she was attacked for it.

Is this how the leftists think they can treat all pro-life advocates? The women should be arrested!

“It’s horrific that a minor expressing love for pregnant women was targeted for violence,” said Kristan Hawkins, president of Students for Life of America. “But this is not an isolated incident. Across the country we are witnessing a rise in the number of incidents of vandalism and violence against peaceful pro-life speech.”

And just like other Americans, Hawkins wants to see justice for the abusive liberal.

We pray that the assailant from today’s attack is brought to justice swiftly. But we also pray for the protection of those who volunteer their time to speak for the innocent, preborn infants and their mothers.”

Students for Life of America has transformed many lives of young teens. Their mission as a non-profit organization is to help young girls see beyond abortion and find other options available, because live is so precious.

Our prayers go out to the young teen assaulted… and that justice is served to her attacker!