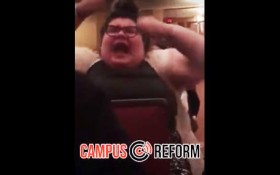 A recent talk on free speech turned into a temper tantrum of political correctness — and the speakers were having none of it. Our friends at Campus Reform posted video, seen below, of one of the most outrageous hissy fits by progressives we’ve ever seen… as well as the retorts that put these special snowflakes in their place and began to win over the crowd.

The event was intended to be a forum and discussion about the use of political correctness on campus, but degenerated into a shouting match as protesters sought to drown out the speakers with cries of “hate speech” and, less imaginatively, “fuck you.”

One of the protesters took it upon herself to pass out literature expressing her concern for the “triggering” event, claiming the speakers “all demonstrate either that you don’t give a shit about people’s trauma and pain and think it’s funny to thrust people into states of panic and distress OR that you fundamentally do not understand what a trigger is, what it means to be triggered, and what a trigger warning is meant to prevent.”

When Campus Reform asked the activist to elaborate on the flyers, she refused to provide her name or comment because, as she put it, “Campus Reform causes death and death threats due to its extreme language.”

As the speakers walked onto the stage they were greeted with boos and middle fingers from many audience members, to which Steven Crowder graciously responded with a middle finger of his own.

The speakers were constantly interrupted throughout the event by shouts from the audience to “go home” or that “we don’t want you here,” with some of the most enthusiastic hollering coming from the very protester Campus Reform had attempted to speak with before the event.

When the protester attempts to interrupt Yiannopoulos at the beginning of the video, Hoff Sommers tells her to “calm down, young lady.” Paying no heed, the protester responds with an impassioned “Fuck you! Fuck you!”

Later on, the young lady begins loudly asserting that “hate speech is not welcome here” and demanding that the speakers “keep your hate speech off this campus,” all while insisting that she is the true embodiment of free speech.

“Stop talking to us like children!” she demands at another point.

“Then stop acting like a child,” Hoff Sommers responds coolly.

Crowder also evoked the rage of the protesters, in his case by discussing the Qur’an, which inspired a female student wearing Islamic garb to demand, “Don’t speak on my behalf!”

“I didn’t speak on your behalf … I talked about the Qur’an,” Crowder states incredulously. “I wasn’t there for the French Revolution, but I can talk about it.”