Donald Trump 100% predicted this months ago - The Horn News 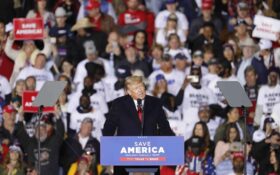 Former President Donald Trump was banned from Twitter in January 2021 while still in office. Since then, the billionaire Elon Musk has made a $44 billion bid to buy the company.

Musk tried to terminate his bid while filing with the SEC on Friday… and the former president had a message for his rival.

“Elon is not going to buy Twitter,” Trump said at a rally on Saturday. “Where did you hear that before? From me. He’s got himself a mess.”

In May, Trump predicted the failure of Musk’s Twitter deal.

“There is no way Elon Musk is going to buy Twitter at such a ridiculous price, especially since realizing it is a company largely based on BOTS or Spam Accounts,” he posted on social media at the time. “If it weren’t for the Billion Dollar breakup fee, Elon would have already been long gone.”

On Saturday, Trump went on to call Musk a “bulls–t artist” for breaking his Twitter deal… and he bashed Musk’s previous history of flip-flopping.

“He’s not going to be buying it. Although he might later. Who the hell knows what’s going to happen? He’s got a pretty rotten contract. I looked at his contract, not a good contract,” Trump said. “You know, he said the other day, ‘I’ve never voted for a Republican.’ I said I didn’t know that. He told me he voted for me. So he’s another bullshit artist. Sign up for Truth. We love Truth.”

During negotiations, Musk had expressed openness toward reinstating Trump’s Twitter account. However, Trump has decided against rejoining Twitter, even in the event of a Musk takeover.

“Go out, by the way while I’m here and sign up now, for Truth Social. It’s hot as a pistol, and you see that I called that one, right?” he said. “One of our highest priorities under a Republican Congress will be to stop left-wing censorship and to restore free speech in America.”

Trump spent much of the remaining speech bashing the Left in this way.

Musk announced that he was abandoning Twitter due to the company’s failure to provide enough information about the number of fake accounts. Twitter immediately fired back, saying it would sue the Tesla CEO to uphold the deal.

The likely unraveling of the acquisition was just the latest twist in a saga between the world’s richest man and one of the most influential social media platforms, and it may portend a titanic legal battle ahead.

Twitter could have pushed for a $1 billion breakup fee that Musk agreed to pay under these circumstances. Instead, it looks ready to fight to complete the purchase, which the company’s board has approved and CEO Parag Agrawal has insisted he wants to consummate.

Trump weighed in on  Truth Social: “THE TWITTER DEAL IS DEAD, LONG LIVE THE ‘TRUTH’”. Musk said in May that he would allow Trump, who was banned from Twitter following the Jan. 6, 2021, riot at the U.S. Capitol, back onto the platform.

Much of the drama surrounding the deal has played out on Twitter, with Musk — who has more than 100 million followers — lamenting that the company was failing to live up to its potential as a platform for free speech.

Musk’s flirtation with buying Twitter appeared to begin in late March. That’s when Twitter said he contacted members of its board — including co-founder Jack Dorsey — and told them he was buying up shares of the company and was interested in either joining the board, taking Twitter private or starting a competitor.

Then, on April 4, he revealed in a regulatory filing that he had became the company’s largest shareholder after acquiring a 9% stake worth about $3 billion.

At first, Twitter offered Musk a seat on its board. But six days later, Agrawal tweeted that Musk would not be joining the board after all. His bid to buy the company came together quickly after that.

When Musk agreed to buy Twitter for $54.20 per share, he inserted a “420” marijuana reference into his price. He sold roughly $8.5 billion worth of shares in Tesla to help fund the purchase, then strengthened his commitments of more than $7 billion from a diverse group of investors including Silicon Valley heavy hitters like Oracle co-founder Larry Ellison.

Inside Twitter, Musk’s offer was met with confusion and falling morale, especially after Musk publicly criticized one of Twitter’s top lawyers involved in content-moderation decisions.

Groups opposing the takeover from the outset — including left-wing activist groups — cheered Friday’s news of Musk’s decision to terminate.

“Despite what Musk may claim, this deal isn’t ending because of Twitter bots or spam accounts. This deal is collapsing because of Elon Musk’s own erratic behavior, embrace of extremists and bad business decisions,” said Angelo Carusone, president of Media Matters, a left-wing nonprofit watchdog group that’s been critical of Musk’s Twitter bid.

Perhaps Musk should practice the art of the deal.