[Video] Trump cheered at college championship and liberals are FURIOUS! - The Horn News 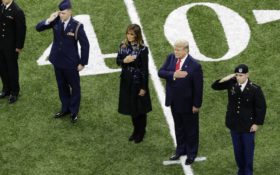 At the College Football Playoff championship game between the Louisiana State University Tigers and the Clemson Tigers, President Donald Trump was the toast of the town.

And liberals were furious about it.

As he and First Lady Melania Trump waltzed onto the gridiron for the National Anthem shortly before the game, fans of both sides erupted into raucous cheers.

The Superdome in New Orleans, where the game was played, was Trump territory.

His reception was far from how baseball fans reacted in Washington D.C., where in Oct. 2019 Trump was booed during Game 5 of the World Series.

He’s hated by the swamp — and embraced by real Americans, though the mainstream media hates to admit it. And that’s not all.

Trump met at least one conservative Hollywood star at the game, and liberals lost their minds. Actor Vince Vaughn appeared on television shaking hands with the POTUS.

Vince Vaughn had the chance to stand up to a rapist, traitor, and child murderer, and instead he enthusiastically shook Donald Trump’s hand. Fuck em both.

“Well , i guess i’ll not watch his stuff any longer , was never a fan anyway,” another person said.

well , i guess i'll not watch his stuff any longer , was never a fan anyway

Donald Trump is announced as cheers erupt in the Superdome at the CFP National Championship Game pic.twitter.com/8fv53PQR9t

Trump was familiar with the two teams. He took in an LSU game in November when the team went up against Alabama.

He also met with many of Clemson’s coaches and players when they visited the White House in January 2019 after winning last season’s national championship. That visit occurred during a partial government shutdown. With much of the White House staff on furlough, Trump arranged for a fast-food buffet of burgers and pizza. White House cups bearing the presidential seal held the fries.

Monday’s game featuring two undefeated teams offered Trump a brief break from another turbulent period in his presidency as House Speaker Nancy Pelosi prepares to send two articles of impeachment to the Senate and tensions between the U.S. and Iran continue to simmer.

Sen. Lindsey Graham, R-S.C., who predicted a championship for Clemson, flew with Trump aboard Air Force One to Louisiana for the game. Graham is an outspoken supporter of Trump who opposes the president’s impeachment. Sen. Tim Scott, R-S.C., also hitched a ride to the game.

While Trump has routinely sparred with professional athletes during his time in office, college football has managed to avoid similar political controversies.

The president attended the Army-Navy football game last month and was warmly welcomed at the LSU-Alabama game.

“Regardless of your political views, that’s pretty cool, having the president at the game,” LSU quarterback Joe Burrow said at the time.