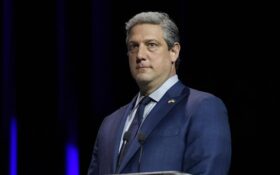 The first debate between Democratic U.S. Rep. Tim Ryan and Republican JD Vance — the two candidates for Ohio’s open U.S. Senate seat — descended quickly into attacks Monday. The two candidates accused each other of being responsible for job losses and putting party loyalty ahead of voters’ needs.

Ryan attempted to distance himself from the unpopular administration of President Joe Biden, and he called for Biden to decline re-election.

Still, Ryan appears to have fallen flat. He was described by one columnist as a having a “debate meltdown.”

“I’ve been very clear. I’d like to see a generational change,” Ryan said on the debate stage. “Mitch McConnell, Donald Trump, the president, everybody. We need a new generation of leadership.”

Biden has repeatedly voiced his intent to run for re-election… and he’s reportedly become annoyed with other Democrats’ search for an alternative.

Ryan ran for president in 2020. He ran against Biden in the Democratic primaries before dropping out to endorse Biden over other Democrats in November 2019.

The face-off between Ryan, a 10-term congressman, and Vance, a venture capitalist and author of “Hillbilly Elegy,” for the seat being vacated by retiring GOP Sen. Rob Portman was one of the most contentious debates of the general election season so far. The race is one of the most expensive and closely watched of the midterms, with Democrats viewing it as a possible pickup opportunity in November.

Take a look at some viral moments —

Rep. Tim Ryan responds "no" when asked if he wants President Biden to run again in 2024

"No. I’ve been very clear. I’d like to see a generational change. We need a new generation of leadership across the board" pic.twitter.com/V3FVOphJr9

The debate quickly descended quickly into attacks Monday, with the candidates for Ohio’s open U.S. Senate seat accusing each other of being responsible for job losses and putting party loyalty ahead of voters’ needs.

Vance said Ryan had supported policies that led to a 10-year-old girl in Ohio being raped. Ryan said Vance had started a “fake nonprofit” to help people overcome addiction issues. The two accused each other of being beholden to their party, with Ryan echoing a comment from former President Donald Trump in calling Vance an “a— kisser” and Vance saying Ryan’s 100% voting record with President Joe Biden means he’s not the reasonable moderate he says he is.

Both candidates sought to tailor their messages to the working-class voters who could determine the election in an evening peppered with barbs and one-liners.

Ryan sought to paint Vance as an extremist, someone who associates with “crazies.”

Vance suggested Ryan’s focus on allegation of extremism was meant as a distraction from pocketbook issues important to voters, such as inflation and the price of groceries.

“It’s close to Halloween and Tim Ryan has put on a costume where he pretends to be a reasonable moderate.” Had he been, Vance said, “Youngstown may not have lost 50,000 manufacturing jobs during your 20 years.”

Ryan said: “I’m not gonna apologize for spending 20 years of my adult life slogging away to try to help one of the hardest economically hit regions of Ohio and dedicating my life to help that region come back. You ought to be ashamed of yourself, JD. You went off to California, you were drinking wine and eating cheese.”

Vance countered that he left Ohio at 18 to join the Marines, and after working in Silicon Valley, he returned to Ohio to raise his family and start a business.

Ryan sought at points to put some distance between himself and his party, repeating his earlier comments that Biden shouldn’t run for a second term in 2024 and calling Vice President Kamala Harris “absolutely wrong” to say that the southern border was secure.

“I’m not here to just get in a fight or just tiptoe the Democratic Party line,” Ryan said. “I’m here to speak the truth.”

Ryan said Vance didn’t have the courage to stand up to people in his own party, noting that during an Ohio rally last month, Trump, who endorsed Vance, said, “JD is kissing my a–, he wants my support so (much).”

Vance retorted: “I’m not going to take lessons on dignity and self-respect from a guy caught on video kissing up to Chuck Schumer and begging him for a promotion to his next job. That’s the kind of guy Tim Ryan is.”

While the general election debate between Ryan and Vance was acrimonious, it didn’t lead to a near-physical altercation, as an Ohio GOP Senate debate back in March during the primary season did. Former state Treasurer Josh Mandel and investment banker Mike Gibbons found themselves face to face on the debate stage, shouting at each other, while Vance told the two to stop fighting.

“Sit down. Come on,” Vance said, sitting in a row with the remaining candidates. “This is ridiculous.”

At the end of Monday’s debate, Vance and Ryan shook hands.