[Video] They LAUGHED when Michael Cohen's lawyer begged for... - The Horn News 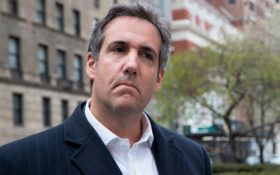 Anti-Trump activists have already poured nearly $600,000 into Stormy Daniel’s purse via an internet crowdfunding platform. So getting rich in 2018 should be easy.

Say some mean things about the president to the media, they showered you with affection, and then you collect half-a-million dollars in cash… right?

When Cohen’s lawyer, Lanny Davis, used an appearance on NBC’s “Today with Megyn Kelly” on Wednesday to beg for cash for his client through a website, he got an unexpected reaction.

Davis is begging for $500,000 in donations for Cohen’s defense fund (from which Davis would collect his fees from, of course) — and the audience laughed in his face.

“Could I just take one opportunity to remind everyone that Michael Cohen has suffered a tragic and difficult experience with his family, and he’s without resources. So we’ve set-up a website…” Davis told the audience, who started laughing. “…called ‘MichaelCohenTruth.com’ and that we’re hoping he’ll get some help from the American people, so that he can continue to tell the truth.”

The audience burst into laughter at the suggestion they’d donate to help Cohen and his lawyer cash-in.

Even worse for Davis? He used the wrong web address… and within minutes, a Trump supporter bought it and redirected to a donation page for Trump’s 2020 campaign.

Even Kelly couldn’t help but dismiss Davis asking for a handout, saying “The audience don’t appear like they’re ready to donate, Lanny.”

The camera then showed people red in the face from laughing, and Davis grew visibly angry at the embarrassment.

The audience groaned and heckled Davis in response.

You can see the video yourself here.