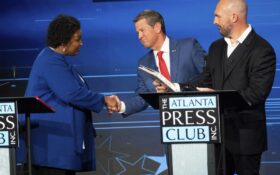 So, the two candidates focused more on their records… although they also addressed national issues.

In fact, the marquee candidates saved their most heated rhetoric for broad issues like gun crime and election laws.

Kemp and Abrams rekindled their long-standing feud over voting rights, with Abrams accusing Kemp as governor and previously as secretary of state of trying to make it harder for some Georgians to vote.

Abrams said, however, that she would accept the outcome of the November election after Republicans criticized her for acknowledging Kemp’s 2018 victory but refusing to use the word “concede.”

“I will always acknowledge the outcome of elections, but I will never deny access to every voter, because that is the responsibility of every American to defend the right to vote,” she said.

Abrams told said earlier this month in an interview with ABC News that she would “not question the outcome of the election” but might “question the process.”

In fact, Abrams has repeatedly used the words “rigged,” “cheated,” and “stolen” to describe her 2018 loss.

Perhaps the old rivals’ most personal clash came on crime and public safety. Kemp, as he has with his campaign ads, spent considerable effort painting Abrams as an enemy of law enforcement, arguing she has no support from Georgia sheriffs and police. She retorted that it’s possible to support “justice and safety” at the same time and said Kemp has made Georgia more dangerous by making it legal to carry a concealed weapon without a permit.

Earlier Monday, Kemp rolled out a fresh set of anti-crime proposals, including increasing mandatory prison sentences for recruiting juveniles into a gang to at least 10 years and making it harder for judges to quickly release suspects who have been arrested.

Libertarian candidate Shane Hazel also appeared at the debate. In Georgia, a candidate must win more than 50 percent of the vote in order to win outright. In other words, a three-way race with Hazel may force the governor’s race into a runoff election.

Take a look at these highlights —