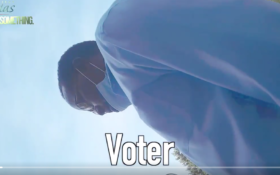 Project Veritas is at it again.

Now the police are investigating the alleged pay-to-vote scheme.

The video released by Project Veritas appears shows a paid ballot worker giving cash to a voter in exchange for a filled-out voter ballot. According to many critics, including New York Post columnist Miranda Devine, the ballot harvesting scheme involves taking advantage of elderly Somalis in Omar’s community.

“This is how you fill it out,” the alleged ballot harvester can be heard saying, instructing the voter about the form. “Put your first name, last name, address, telephone number, ID number, or the last four digits of your Social Security number.”

“After that, you will sign it, that’s all,” the ballot harvester concludes.

The voter responds, asking, “Yes … tonight we will close the deal. Okay?”

“Yes, yes,” the ballot harvester replies quickly, before handing over cash. “Now, take this for your pocket change.”

The voter then agrees to fill it out and return it to the ballot harvester.

Even more shocking, the videos also seem to show this exchange isn’t an isolated scandal. Witnesses said a host of other illegal practices, including accusations of supporters connected directly to the Omar campaign walking side-by-side with voters to the poll booths and instructing them on who to vote for, were committed.

Another woman can be heard saying, “She’s the one who did it,” referring to Omar.

She later says in the video that Omar personally came up with the pay-to-vote scheme and that her campaign workers are “counting the ballots” and “counting the votes.”

You can see the shocking video below:

BREAKING: Omar Connected Harvester SEEN Exchanging $200 for General Election Ballot."We don't care illegal."…"We are taking the money and we'll vote for you" "@IlhanMN is the one who came up with all this"#CashForBallots pic.twitter.com/mCoCn3ryVK