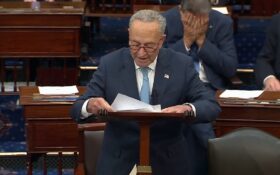 Senate Majority Leader Chuck Schumer, D-N.Y., was embarrassed by a 17-year-old video this week… and he wasn’t alone.

Senate Majority Whip Dick Durbin, D-Ill., was also humiliated by his own words from a few years ago.

They each went viral for their hypocritical messaging on the filibuster. Schumer blatantly contradicted his own remarks on video, while Durbin’s video devolved into confused, muddled messaging.

A senator can delay a vote by extending debate, as part of a practice called “filibuster.” After that, the Senate requires 60 votes to stop a filibuster and begin voting. Before 2017, this rule also applied not only to legislation but also to judicial appointees.

At a press conference last year, Schumer fielded questions about eliminating the filibuster to force President Joe Biden’s agenda through the narrow 50-50 Senate.

In 2005 the Senate included 51 Republicans and 49 Democrats.

Naturally, the Senate Democrats took full advantage of the filibuster. They used it as a kill switch to reject appointments by former President George W. Bush.

Schumer was no exception. He gushed about the virtues of the filibuster during a press conference in 2005.

Schumer was caught on video, and he went viral for it earlier this month.

He said to an applauding crowd:

Bottom line is very simple. The ideologues in the Senate want to turn what the Founding Fathers called the “cooling saucer of democracy” into the rubber-stamp of dictatorship. We will not let them.

According to the Senate’s website, former President George Washington allegedly said that the Senate existed to “cool” legislation churned out by the House, like a saucer for cooling hot tea.

Washington never saw a filibuster in the U.S. Senate. He died in 1799, seven years before the Senate created the filibuster.

They want, because they can’t get their way on every judge, to change the rules in midstream. To wash away 200 years of history. They want to make this country into a banana republic where if you don’t get your way, you change rule. Are we gonna let them?

The crowd shouted, “No!”

Schumer concluded, “It will be a doomsday for democracy if we do.”

Durbin also went viral for changing his tune on the filibuster…  after only three years!

In 2018, Durbin went on ABC News to praise the filibuster.

Under then-President Donald Trump, the Senate included 52 Republicans and 48 Democrats. So, the Senate Democrats benefitted from the filibuster.

ABC’s George Stephanopoulos asked Durbin, “What about that nuclear option, doing away with the filibuster?”

Durbin said, “Well, I can tell you that would be the end of the Senate as it was originally devised and created, going back to our founding fathers.”

Again, the Senate was not originally created with a filibuster. The Senate first convened in 1789, and it introduced the filibuster in 1806.

“We have to acknowledge out respect for the minority, and that is what our Senate tries to do in its composition and its procedure,” Durbin continued.

Now that Democrats are in control, Durbin described the filibuster as a racist, old instrument of Jim Crow laws.

Durbin said on the Senate floor in March 2021, “Today, nearly 65 years after Strom Thurmond’s marathon defense of Jim Crow, the filibuster is still making a mockery of American democracy.”

He later claimed to be referring to only one type of filibuster: the silent filibuster.

Since 2010, the Senate has allowed its members to leave the room after starting a filibuster. Durbin has objected to this practice.

Durbin said on the Senate floor:

I have been long open to changing the Senate’s rules to restore the “standing filibuster.” If a Senator insists on blocking the will of the Senate, he [or she] should have to pay some minimal price of being present. No more phoning it in… If the Senate retains the filibuster, we must change the rules so that a Senator who wants to bring our government to a standstill endures – at least – some discomfort in the process.

Too bad we have tape of his real thoughts.