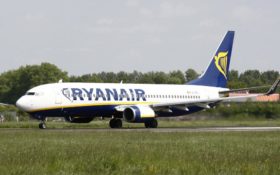 A Ryanair flight on Friday sent several dozen passengers to the hospital with bleeding ears and headaches after landing.

The flight which had left from Dublin, Ireland and was en route to Zadar, Croatia experienced “inflight depressurization” and was forced to land prematurely in Germany.

A passenger from the flight is now accusing Ryanair of downplaying the incident after they sent out a statement that only a “small number” of passengers “received medical attention as a precaution.”

“In line with standard procedure, the crew deployed oxygen masks and initiated a controlled descent. The aircraft landed normally and customers disembarked, where a small number received medical attention as a precaution,” reads the official statement.

But, a viral video of the terrifying flight shows that the event was not a so-called “controlled” descent —

Amazing video from Mr. Kevin Burke. You can see how terrified we were. No-one speaking, no-one moving. Silence and just silence.#Ryanair #nightmare pic.twitter.com/YFYRiORy2s

Speaking with The Irish Times, passenger Barry Holden admitted that he feels Ryanair is trying to downplay the horrific event. Police in Frankfurt reportedly confirmed that out of the 189 passengers, 33 were taken to a nearby hospital.

Some of the passengers reported bleeding of the ears — and Holden claims that he was told that he was the 43rd person being treated by German Red Cross workers.

A picture from one of the passengers of the flight FR7312, from Dublin to Zadar. She cannot fly due her injuries. We are still in the Frankfurt-Hahn. No information, no alternatives, no place to rest.#Ryanair#nightmare@Ryanair pic.twitter.com/zcdNGHS1VF

“How many were registered after me I’m unaware. However, a quarter [of the passengers] is not a ’small’ number in my mind,” said Holden, adding that Ryanair’s statement was a “careful downplaying of events.”

The worst moments of whole my life. You are in the air and one moment after you are just falling in the sky, your ears burn, there is no air and your mouth taste like iron.#Ryanair

The low-cost airline admitted in their statement that they were unable to accommodate most passengers to be rebooked the next day.

“Customers were provided with refreshment vouchers and hotel accommodation was authorized, however there was a shortage of available accommodation. Customers boarded a replacement aircraft which departed to Zadar the following morning and Ryanair sincerely apologized for any inconvenience.”

Passengers reportedly were not given hotel accommodations, rather, they were sent to sleep in military-style camp beds or on the floor of the airport.

Shame on you, Ryanair.