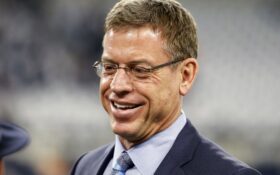 NFL legend Troy Aikman made a living for the Dallas Cowboys throwing right on the money.

But his latest comments, which took place in the broadcast booth, were off the mark.

And what he said angered American patriots all across the nation.

Just before week 6’s matchup between the Tampa Bay Buccaneers and the Green Bay Packers, Aikman’s audio was captured criticizing the military flyover.

“That’s a lot of jet fuel just to do a little flyover,” he was allegedly heard saying.

“That stuff ain’t happening with [a] Kamala-Biden ticket. I’ll tell you that right now, partner.”

His partner Joe Buck responded in kind, saying: “That’s your hard-earned money and your tax dollars at work!”

Twitter went aflame about the flyover comments. Many accused the former Cowboy of mocking the military.

Conservative activist Brandon Tatum wrote that the comments were a reflection of today’s NFL and the larger sports world, and only a sign of things to come.

“This tells you everything you need to know,” he wrote on Twitter. “Celebrities and professional sports no longer care about our country and under a Biden/Harris administration, that’s exactly what you’re going to get. What a disgrace. Troy Aikman didn’t you retire from AMERICA’s TEAM??”

This tells you everything you need to know. Celebrities and professional sports no longer care about our country and under a Biden/Harris administration, that's exactly what you're going to get. What a disgrace. Troy Aikman didn't you retire from AMERICA's TEAM?? pic.twitter.com/HxULqswIAJ

Aikman responded to the controversy with an apology. He insisted that he supported the military and that he loved “a flyover but it was odd to see one over a mostly empty stadium,” Aikman said.

“… I am an unwavering patriot that loves this country, has always respected our flag, supported the men and women in the armed forces as well as those in uniform who serve & protect and for anyone to suggest otherwise doesn’t know me, my beliefs or what I have stood for my entire life.”

Far from wasting jet fuel, critics pointed out, there’s a reason that the military holds flyovers at events like NFL games.

“You’re wrong,” Twitter user Joe Mesa said, “and don’t understand the training budget, training hour forecast. Flyovers have zero additional cost to the tax player. That JP is burning and that pilot is flying if it’s a Sunday flyover or not.”

Mike Alyward also chimed in with a similar sentiment, saying: “Not wasteful, you are completely misinformed.”

“The pilots use this as a training flight instead of training elsewhere. They need to make rain proficiency and would fly regardless of whether it was over the stadium or not.”

So Aikman, who spent most of his career backpedaling as a quarterback, did some backpedaling of his own from inside the broadcast booth.