[Video] Louisiana teacher ARRESTED for speaking out - The Horn News 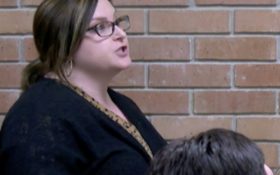 The Louisiana teacher whose widely viewed arrest at a school board meeting sparked online outrage has returned to work even as fallout from the incident rages on.

Gov. John Bel Edwards said he saw nothing on videos of Deshia Hargrave’s arrest that warranted her rough treatment. Meanwhile, the superintendent of Vermilion Parish Schools said he, his staff and his family have received death threats.

Hargrave returned to the classroom Wednesday. The local prosecutor said he won’t pursue charges against Hargrave, who was appalled by her treatment and grateful for support from students, parents and others. A rally of support for the teacher was planned Thursday afternoon.

“By taking away my voice they’ve taken away — or tried to take away — my First Amendment rights to speak,” Hargrave said in a video posted on the Louisiana Association of Educators’ Facebook page. “Go to your local school board meetings,” Hargrave said. “Speak out. Be vocal.”

Edwards, who is married to a teacher and gets support from teacher unions, said he “didn’t see anything that warranted that type of action.”

“I’ve stopped reading them because they’re just so bad and disgusting,” Puyau said, at times struggling to compose himself in an interview with The Associated Press. He said the school system offices went into temporary lockdown, and his daughters had to delete threats on their social media.

The turmoil follows the board’s 5-3 vote Monday night approving a new 3-year contract raising Puyau’s salary by roughly $30,000, to about $140,000 annually, with incentive targets that could add 3 percent per year.

He said the raise matches what other school officials make in similar jobs.

Hargrave, a middle school English teacher, said she felt like she was representing all teachers in the parish by questioning the raise, at a time when teachers haven’t received an increase in 10 years, despite growing class sizes and other demands.

In an interview that aired Thursday morning on NBC, Hargrave said she hopes the ordeal prompts others to get more involved in education.

“It’s sad that a woman has to be forcibly, violently removed from a board meeting for people to start caring,” she said in the interview.

“I’m hoping for teachers, people outside of education to have a voice, show up – you don’t have to say anything, just show up , just do something,” she added.

Video of the meeting shows that Hargrave addressed the superintendent directly after raising her hand to speak and being recognized. After a verbal exchange, school board member Kibbie Pillette said Vermilion Parish School Board President Anthony Fontana beckoned to a school resource officer hired by the board, who confronted Hargrave, ordering her to get her things and go.

“I’m going,” she said, making her way out. Moments later — after briefly leaving the view of any cameras — she was on the hallway floor with her hands behind her back, being handcuffed and complaining that the officer was hurting her.

“Stop resisting,” the marshal said, lifting Hargrave to her feet.

“I am not, you just pushed me to the floor,” Hargrave said.

Puyau said he did not order Hargrave’s removal or arrest. While refusing to comment on details, Puyau made clear that he was unhappy with how things played out.

“It was not good in any way,” he said. “We are a good community. It took everybody by surprise. I’m having a hard time with this, but we care about our teachers and our support staff.”